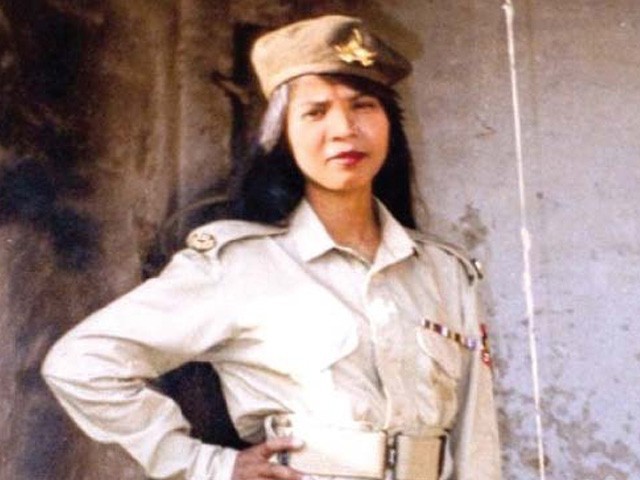 MULTAN  : Aasia Bibi, a blasphemy accused who was acquitted by the apex court on October 31, flew out of Pakistan in the wee hours of Thursday after her release from Multan jail on Wednesday evening.

According to BBC Urdu, Bibi left for Netherlands from Noor Khan Airbase along with her family and the Dutch ambassador.

Earlier, she was shifted from Multan jail to the federal capital amid heightened security on Wednesday night – exactly one week after the country’s top court acquitted her of blasphemy charges that were levelled against her in 2009. 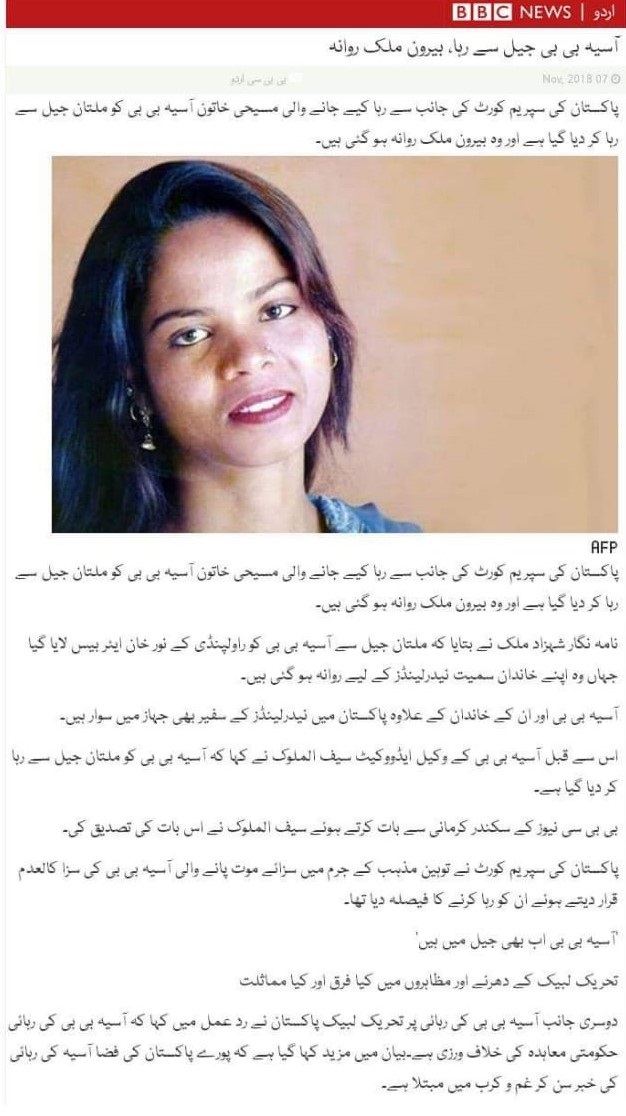 According to official sources, the Supreme Court on Wednesday morning issued a notification to the Ministry of Interior and the Ministry of Law and Justice for her release.

The notification was forwarded to District Jail Sheikhupura which issued the order for Aasia Bibi’s release from Multan Women Jail, where she had been shifted in view of security threats.

The sources said that prior to her release, the jail administration conducted her medical examination and found her completely healthy. Later, she was shifted to Multan airport in a convoy amid heightened security. During her movement, the route from jail to the airport was also briefly blocked.

Aasia Bibi was taken to Islamabad in a private plane, a source added.

Thousands of protestors mainly belonging to the Tehreek-e-Labbaik Pakistan (TLP) poured onto the streets in protest after a three-judge bench of the Supreme Court overturned Asia Bibi’s conviction on October 31.

The protestors blockaded major cities to demand her immediate execution, in a three-day stand-off that ended when the government agreed to allow a review of the ruling and put her name on the no-fly list.

However, Minister of State for Interior Shehryar Afridi told Voice of America earlier in the day that until Bibi is convicted or there is a judicial order, and her name cannot be placed on the Exit Control List (ECL).

“Every Pakistani, no matter their religion, is the responsibility of the government and no one can be given a licence to play with someone’s life or property,” he added. “Aasia Bibi and her family have been provided complete security.”

When asked about the clause in the agreement with the TLP that allowed a review petition on Aasia’s acquittal, he said such a petition is within a citizen’s rights to pursue and that any decisions made by the SC will be fully implemented.

Speaking on the protests, Afridi said, “We decided not to use force and engage them instead.” He said all stakeholders and the opposition were consulted about decisions made in the wake of the protests.

The government says legal proceedings against scores arrested after the protests are continuing and there will be no compromise on supremacy of the law.

Prime Minister Imran Khan directed the government of Punjab to prepare compensation package for the people who suffered damage to their properties in recent protests by ‘miscreants’, Radio Pakistan reported.

The PM also reiterated his commitment to protecting the lives and property of people and said maintaining law and order and ensuring writ of the state is the government’s top priority.

“My top most priority is to ensure peace and rule of law,” the PM said while talking to members of the National Assembly from Swabi, Mardan, Charsadda, Nowshera and Peshawar districts at the PM Office.

The prime minister said presently the country was passing through a critical juncture, but expressed the hope the people would see a visible change in the next six years.

The assurance came after the government started “crackdown” against “miscreants” involved in damaging public and private properties and vehicles during last week’s protest sit-ins after the acquittal of blasphemy accused Aasia Bibi.

The government had taken the decision to take action against the troublemakers amid criticism against it for striking a deal with the protesters in which there had been no mention of the damage caused to the properties of innocent people.

Similarly, the government had been facing criticism for not taking any action against those leaders of the protest who had threatened the judges and used seditious language against state institutions.

The prime minister said when the Pakistan Tehreek-e-Insaf came to power, the country was passing through a critical financial crisis. “The government’s first priority was to approach the friendly countries to stabilise the economy, and provided the people all possible relief to minimise their problems.”

Imran said the government was also working on giving required facilities to export industry to increase the country’s exports, in addition efforts were also being made to provide health, education and other facilities to the people on priority basis.

The prime minister told the parliamentarians that the five-million housing scheme of the government would not only provide housing facilities to the people, but it would also generate economic activities in the country and provide job opportunities to the younger generation.

“Work is also in progress to provide temporary shelters and two times meal to the poor and destitute in various cities,” the prime minister said.

The prime minister asked the members of the assembly to inform the government immediately if in their areas the Benazir Income Support Programme’s survey was not carried out so that a poverty survey could be carried out in those areas on a priority basis.

He said the ministers had been made responsible about their duties and their performance would be reviewed regularly, adding that the PTI government had set the tradition of reviewing performance of minister for the first time.