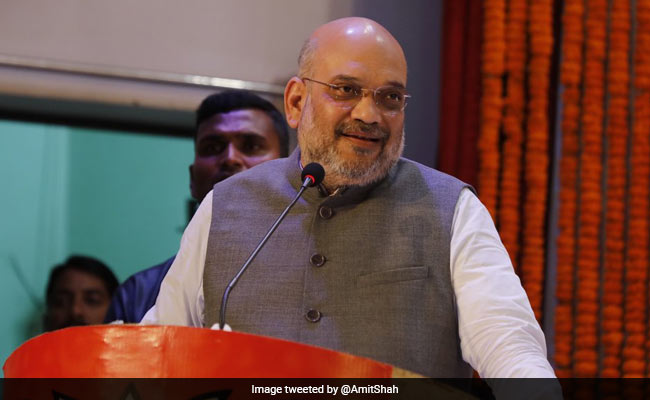 Amit Shah had called for renaming of Mughalsarai station, a proposal that caused a row in parliament

NEW DELHI:The BJP's name changing spree has drawn intense criticism from politicians as well as the civil society, many of whom have pointed out that the party leaders should change their own names before proceeding to rechristening cities. Even some of the BJP allies have ranged themselves against the party with similar suggestions. A minister from Uttar Pradesh has been spoken out against renaming, alleging that it betrays the BJP's need to divert attention from the needs of oppressed sections of society.


"They (the BJP) have a national spokesperson Shahnawaz Hussain, union minister Mukhtar Abbas Naqvi, Uttar Pradesh minister Mohsin Raza. They should change their names first," said minister Om Prakash Rajbhar - the chief of SBSP -- whose boss, Chief Minister Yogi Adityanath, has changed the names of Allahabad, Faizabad and Mughalsarai over the last weeks.
Today, historian Irfan Habib said names like Munsi, Majumdar and Shah also have Islamic origins. Asked about the name of BJP chief Amit Shah the 87-year-old said, "Shah is a Farsi word, not Sanskrit. If they have to change names, they should change their own names first, and then change the names of cities".
Mr Shah had called for the renaming of Mughalsarai station, a proposal that caused a row in parliament.
There have been calls lately to change the name of Agra - home to Taj Mahal and the country best-known tourist destination -- to Agravan or Agrawal.  Sangeet Som, the BJP lawmaker accused in the Muzaffarnagar violence, wants the name of Muzaffarnagar to be changed to Laxmi Nagar.
The name of Faizabad was changed to Ayodhya last week. Allahabad has been renamed Prayagraj and Mughalsarai Railway Station has been named after BJP icon Pandit Deendayal Upadhyay.
Gujarat Chief Minister Vijay Rupani has said the name of Ahmedabad will also be changed to Karnavati before the 2019 elections.
While Yogi Adityanath is yet to respond to Mr Rajbhar's remarks, he has said he did "what felt right" and promised to "keep it up".
The renaming spree which started with the metros -- Mumbai, Chennai, Kolkata and Bengaluru -- to revert to what the state governments of the day said the pre-British heritage, had continued with changing the names of roads in the national capital named after Mughal emperors.
In 2015, Aurangzeb Road was named after former president Dr APJ Abdul Kalam. The same year, Union Minister VK Singh wrote to the government, suggesting that Akbar Road or any other road in Lutyen's Delhi be named after Maharana Pratap, the iconic Rajput king.
Then Union Minister for Urban Development, Venkaiah Naidu had said the government was "not involved" in such proposals. Its focus, he said, was on development, not naming and renaming of streets.
But in May this year, a signboard came up on Akbar Road, which read "Maharana Pratap Road". It was later removed by the police.
"You cannot jump from ancient to modern (age) and that too contemporary -- 2014 onwards," said Heramb Chaturvedi, professor of medieval and modern history at the Allahabad University.
"You can't move from 8th Century to 21st Century directly. The interceding centuries have to be taken into account. You have to talk in terms of development of human society," he added.-NDTV