"If Verma is removed, then the problem will only get worse and not better," added the senior BJP leader.


Bharatiya Janata Party (BJP) Rajya Sabha MP Subramanian Swamy on January 10 said that Central Bureau of Investigation (CBI) Director Alok Verma could not be sacked based on the Central Vigilance Commission (CVC) report, claiming it was based on a “false report”.


“They cannot remove him (Alok Verma) on the basis on the CVC report. The CVC report claims based on what? On another officer who gave a false report. So, it has to be investigated. I don’t think it can be done,” Swamy told reporters in New Delhi. 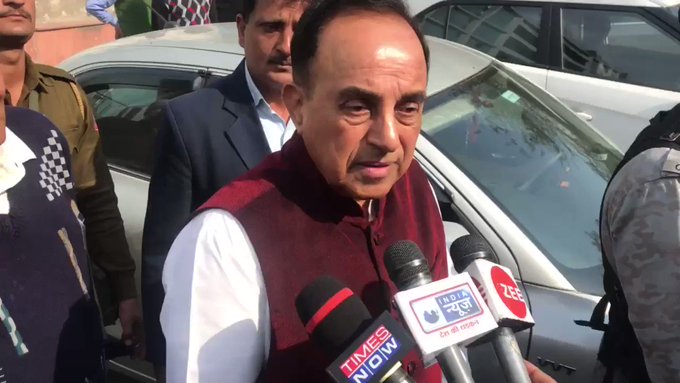 Arvind Gunasekar@arvindgunasekar
DCBI Alok Verma can’t be sacked based on the CVC’s report without being heard. PM Modi should not listen to bogus legal brains.
SC has already taught us a lesson: BJP RS MP @Swamy39 on reports of decision will be taken at Selection Committee meeting today evening to sack Verma
1,387
12:31 PM - Jan 10, 2019

722 people are talking about this
Twitter Ads info and privacy
The BJP leader also criticised certain unnamed members of the party and added that the PM had been wrongly advised by “bogus legal brains in his government”. He said, “If Verma is removed, then the problem will only get worse and not better. I would like the prime minister to take steps to see that this episode becomes history and not to listen to bogus legal brains in his government who have given wrong advice and landed us in this situation… in a situation where the Supreme Court has to teach us the law.”
Verma was divested of his duties in October 2018 without consulting the committee that appointed him. The Supreme Court bench on January 8 set aside the CVC’s October 23 order that divested Verma of the CBI chief’s powers. However, the Court also asked the high-powered select committee comprising of Prime Minister Narendra Modi, Opposition leader Mallikarjun Kharge and Justice AK Sikri to convene a meeting and give its view on the matter.


The committee headed by the prime minister met on Wednesday, January 9, but failed to arrive at a specific conclusion. The apex court said that Verma could not take significant decisions till the committee comes out with its views on the action taken against him.--NC
Posted by Raj Rishi at 8:08 AM