It's not a coincidence that PM Modi and Amit Shah almost never target her in the manner they target other political rivals.

On May 13, a group of BJP supporters, standing on the side of a road in Indore, saw Priyanka Gandhi’s convoy approaching. They were prepared for this. When the convoy came closer, they chanted ‘Modi, Modi, Modi’. But what happened next, was not a part of their prep.


The convoy suddenly halted and Priyanka Gandhi got out of her car, marched up to the group, shook hands with them and with a beaming smile, said, “aap apni jagah, main apni jagah. All the best. (You are where you are and I am where I am).”

The video of the brief, warm interaction, shot and circulated by one of the BJP supporters in the group, instantly went viral on social media. The polarising campaign of this election season is no match for Priyanka Gandhi’s ability to set the tone of how her political adversaries respond to her. 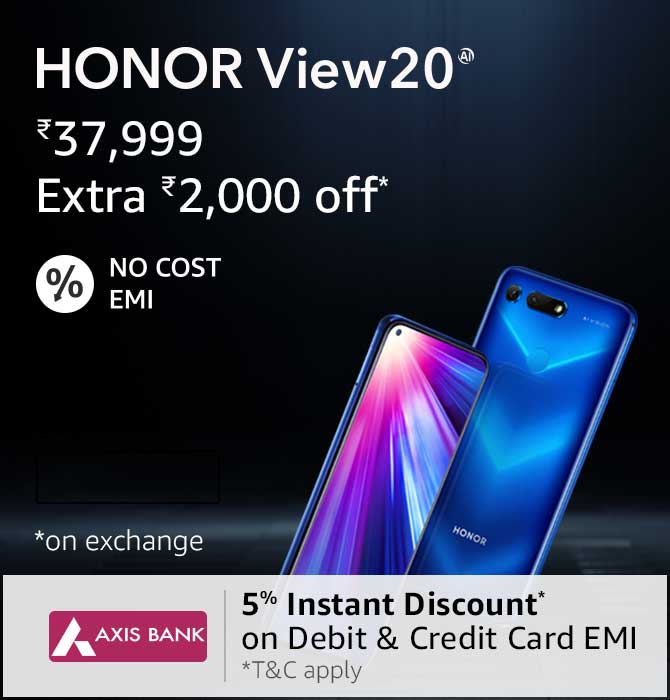 Priyanka Gandhi’s formal entry into politics was announced in January this year, not long before the Lok Sabha polls were announced. While she is no newbie to campaigns — she has managed Rahul Gandhi’s campaign in the past and has regularly canvassed for the party in the Uttar Pradesh and elsewhere — being the Congress’ face in the key state is no easy task. She is up against the combined might and muscle of Chief Minister Yogi Adityanath, Prime Minister Narendra Modi and BJP President Amit Shah. And in a short while, she’s proved a formidable opponent.

While there is a reasonable case to be made out about how her arrival may not bolster the party’s prospects in the short-run, she is hitting a chord with the public that has the potential for Congress’ revival in the state in the long-run. Being a Gandhi scion is, of course, a part of the appeal she generates but a significant portion of her rising popularity can be attributed to her campaigning style.
From day 1, she has focussed on real issues
An election season that has been marred by the ruling Bharatiya Janata Party’s divisive campaign and raking up of non-issues like Pakistan, ‘Urban Naxals’, ‘tukde-tukde gang’, Gandhi started off the party’s campaign by reaching out to protesting shiksha mitras, anganwadi workers, farmers and youth in the state. These groups have been protesting for their rights for a long time but have been ignored by the ruling dispensation. In her speeches, she regularly mentions sugarcane farmers who are battling for unpaid dues, unemployed youth and women. 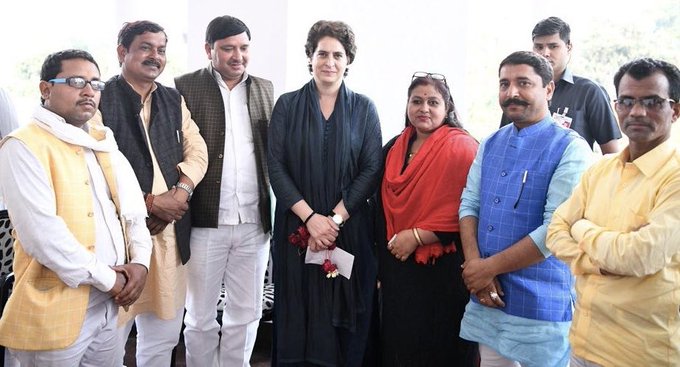 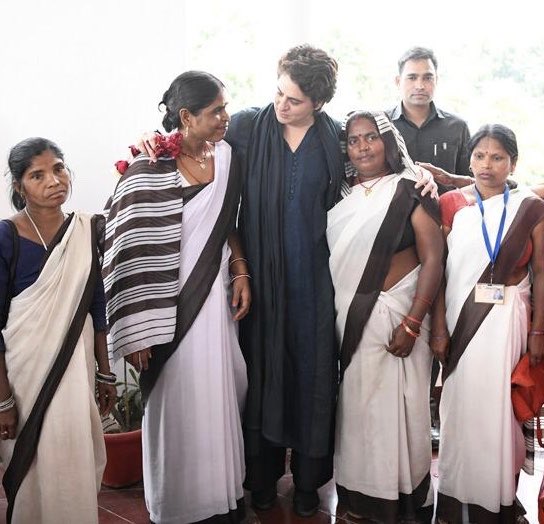 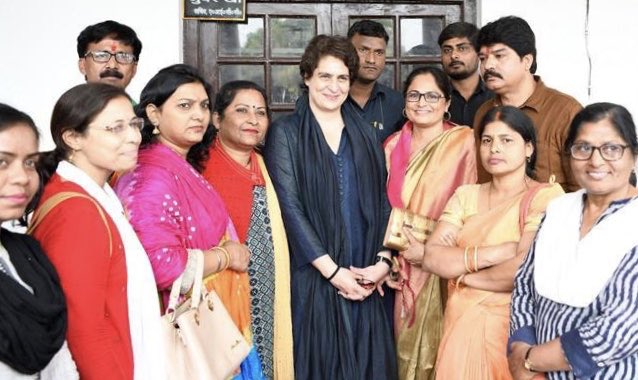 
6,862 people are talking about this
Twitter Ads info and privacy
She’s not lacking in rhetoric
While talking about issues is important, rhetoric is also key to grab the attention of your audience. Congress party is often attacked for elitism and how many of its top leaders fail to appeal to voters in the Hindi heartland. Priyanka Gandhi stands out. Her Hindi oration is perfect, providing an instant connect with the Congress’ party’s primary voter base. At a recent rally in Punjab’s Bathinda, she even showed-off her Punjabi skills.


At the same time, her speeches are peppered with patriotic rhetoric — but not one that is divisive unlike the BJP’s. For example, during her speech at Pratapgarh in Haryana, she told the audience that patriotism means awareness (jagrukta hi deshbhakti hai) and that the Indian voter does not lack it.
At one rally she granted newspapers a perfect headline by saying, “If you (PM Modi) are a nationalist, then at election time, talk about India, not Pakistan.” It has everything the media loves — PM Modi, election, nationalism and of course, the word Pakistan.
While it is a known fact that PM Modi and other BJP leaders are given disproportionate media coverage, Gandhi’s carefully framed political idioms which are both memorable for the audience and easily quotable by the press, have made it hard for the same media houses to ignore her.
She’s great at highlighting her opponent’s flaws
Priyanka Gandhi has not shied away or minced words when it comes to addressing Prime Minister Modi. The state of Indian politics being what it is, almost any humility towards your opponent is seen as ‘weakness’, and Gandhi has made sure that she is not looked at like this.
Besides criticising the policies of the government, her direct attacks at PM Modi have helped hurt the perception of him being ‘invincible’. While the BJP spends a lot of money and energy in portraying the PM as someone who is strong, relatable and accessible, Gandhi demolishes these myths in her speeches constantly. She has called him ‘a coward’ and a ‘weak PM’ who can’t even answer the questions of the Indian public and has openly mocked his habit of hugging world leaders when she accused him of ‘hugging leaders all over the world but not his own constituents’ and how he did not have time to spare for the lakhs of farmers who marched to Delhi in protest of rising rural distress and the government’s policies.

At another rally, she compared Modi to Duryodhan in Mahabharat. She dubbed the PM ‘arrogant’ and said that Duryodhan’s end was brought about due to a similar arrogance. The coup de grâce was the powerful Ramdhari Singh Dinkar poem on the same subject.
Her opponents fear her
There is a reason that while PM Modi, Amit Shah regularly make personal attacks against Rahul, Sonia Gandhi (‘Congress ki vidhwa’, ‘jersey cow’), Manmohan Singh and pretty much the entire Congress leadership, they don’t really attack Priyanka Gandhi in the same manner. The reason is that any such remarks will give her more ammo to further hit out at them.
When BJP leaders had attacked her for wearing sarees while campaigning but wearing jeans (a.k.a whatever she wants) when she’s not, she changed her Twitter display picture to one where she was wearing jeans and a shirt. When her husband Robert Vadra was being used to target her and the party, she accompanied him to Jaipur when he had to appear before the ED. She does not play on a defensive foot, which makes her a difficult opponent.
And of course, humour
“He believed that he won’t come on people’s radar due to the cloudy weather,” she had said in Hindi amid cheers from the crowd that had shown up for her roadshow in Indore this week. The well-timed remark, that took on the PM’s cloud cover theory and mocked it to bits was a bit of reprieve. Her other speeches regularly use humour to attack the BJP and its policies.

Indian politics can use a little bit of humour, considering all we are served is xenophobia (“illegal migrants” are “termites”), misogyny (50 crore ki girlfriend), crassness (pappu ki pappi), and Islamophobia (Rahul Gandhi is contesting from Wayanad because it’s a Muslim-dominated constituency). This is a low bar that still appears to be very high for our politicians.
Her speeches centre the Indian public, always
This is probably one of the most remarkable qualities of Gandhi’s campaign. Her way of lovingly shaming her audience by saying things like, “maybe you don’t understand that no one is greater than the public in a democracy”, “you have forgotten your power…you make leaders, you give them power”, makes people the focus.
Instead of rambling on, she addresses the audience, waits for them to respond and then addresses them based on the same. Compared to most political speeches, the method is more engaging and helps one appear accessible, something the Congress party can really use today.

While it may sound like a small thing, the Indian public is constantly made to feel powerless, is taught how to revere its leaders, is expected to bow down. Inspiring words like these, if backed-up with policies and actions that reflect the same sentiment are the most basic requirements of creating a participative democracy.--NC