Lok Sabha Elections 2019: The man, wearing a red shirt, was pulled off the vehicle by Arvind Kejriwal's supporters. He has been detained and questioned by the police. 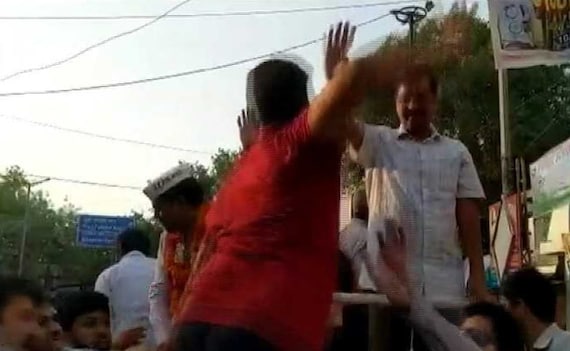 The man, wearing a red shirt, was pulled off the vehicle by Arvind Kejriwal's supporters


NEW DELHI: Delhi Chief Minister Arvind Kejriwal was today slapped by a man during a roadshow in the Moti Nagar area. Mr Kejriwal, the Aam Aadmi Party chief, was standing on an open jeep, canvassing in the New Delhi constituency, when the man jumped up and attacked him. He was identified as 33-year-old Suresh, a spare parts dealer. The AAP, meanwhile, has blamed the BJP for the attack.


"They have created a perception that the only way to take on Arvind Kejriwal is to physically assault him," AAP lawmaker Saurabh Bhardwaj told NDTV.

The man was pulled off the vehicle by Mr Kejriwal's supporters. He was rescued by the police from AAP workers who thrashed him, news agency ANI reported. He has been detained and is being questioned by the police.


Deputy Chief Minister Manish Sisodia has attacked Prime Minister Narendra Modi and BJP President Amit Shah over the assault.
"Do Modi and Amit Shah want Kejriwal to be murdered? In the five year, they couldn't break his resolve, couldn't defeat him in the elections, now you want to eliminate him, you cowards! This Kejriwal is your end," Manish Sisodia tweeted in Hindi.

This is how a BJP supporter who attacked CM kejriwal earlier , was interrogated by Modi police.#BJPScaredOfKejriwal pic.twitter.com/j4WchK0Qox
— Saurabh Bharadwaj (@Saurabh_MLAgk) May 4, 2019

Attacks on CM @ArvindKejriwal are always preventable, BJP always justifies the attacks.
They are related to those who justified Nathuram Godse killing Gandhi. pic.twitter.com/ThQZApUh2x
— Saurabh Bharadwaj (@Saurabh_MLAgk) May 4, 2019

The Trinamool Congress has also slammed the BJP, blaming it for the attack.

The @ArvindKejriwal incident in Delhi and the malicious spin on a silly video targeting @MamataOfficial in Bengal prove that BJP has already LOST. They are desperately creating incidents to try and find 'game-changers'. People have already changed the game! Modi is OUT: Derek


76 people are talking about this
This was not the first time Arvind Kejriwal is roughed up. Last year, a man who handed him a letter outside his office, swooped down to touch his feet, got up and forcefully smeared chilli powder on his face. The incident had taken place inside one of the capital city's most protected buildings, the Delhi Secretariat.--NDTV