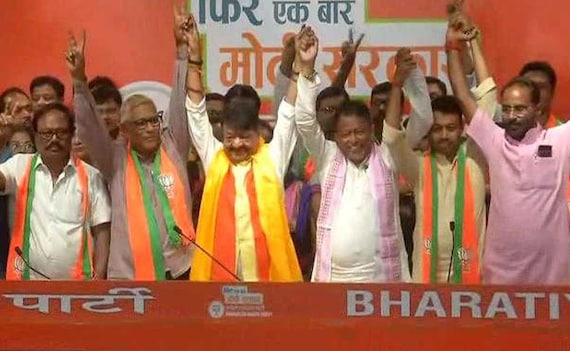 KOLKATA:A huge contingent of leaders, most of them from Mamata Banerjee's Trinamool Congress, joined the BJP today, led by the son of Mukul Roy -- an expelled Trinamool leader who was the architect of the BJP's growth in the state.


Their induction marks a huge boost for the party, which won 18 of the state's 42 Lok Sabha seats last week - up from two seats in 2014. It also spells hope for the BJP in the next assembly election in the state, which will be held in 2021.

The exodus comes weeks after Prime Minister Narendra Modi promised the Chief Minister that 40 legislators from her party were in contact with the BJP and would soon change camp.
Today's list had only three legislators -- Trinamool's Subhrangshu Roy, the son of Mukul Roy, Tusharkanti Bhattacharya and CPM's Debendra Nath Roy. The rest were 16 municipal councillors from the Trinamool Congress - crucial for grassroot influence.


Are you looking to buy a latest smartphone that is an amalgamation of design, performance and functionality? Shop online at Amazon India for the Redmi 5 and experience amazing features such as 5.7-inch display with an aspect ratio of 18:9, octa-core Snapdragon 450 processor, 12-megapixel high quality camera, 3,300 mAh battery and more.

Ahead of her ousting the Left in the 2011 assembly elections, Mamata Banerjee's party had also established her control on the Kolkata Municiipal Corporation.
Senior BJP leader Kailash Vijayvargiya, who is in charge of Bengal during the election said: "Like the elections were held in seven phases in West Bengal, joining the BJP would also happen in seven phases. Today was just the first phase".

The BJP made huge inroads in Bengal after inducting Mukul Roy - once a close aide of Chief Minister Mamata Banerjee -- in November 2017.  At the time, Mukul Roy had claimed the party would soon grab power in the state. Since his induction, around six TMC heavyweights have joined the BJP.
But his son Subhrangshu Roy had continued in the Trinamool Congress and was recently suspended for anti-party activities.
In April, the Prime Minister had said at rally near Kolkata, "Didi, on 23 May, the day of results, the lotus will bloom everywhere and your MLAs will leave you and run. Even today, Didi, 40 of your MLAs are in contact with me".

"I am saying at least find one," the Chief Minister had retorted, and then accused the Prime Minister of violating the constitution. Her party had accused him of horse-trading.--NDTV