The CBI has said that 11 girls were allegedly murdered by Brajesh Thakur and his accomplices.


The agency said that on the pointing out of one of the accused, a particular spot in a burial ground was excavated from where a “bundle of bones” was recovered.

Leader of the Opposition in Bihar, RJD leader Tejashwi Yadav, took to Twitter to attack the ruling parties, both in the state and the Centre. Yadav tweeted, “Narendra Modi is coming to Bihar once again, but he will not make a single mention of this case. After all, his friend Nitish Kumar and several Bharatiya Janata Party (BJP) ministers are involved in this case,” adding, “The interim CBI director was punished for trying to save these people,”

1,124 people are talking about this
Yadav further added that if Bihar CM Nitish Kumar had any shame left, he would have apologised for the case. He asked why Nitish Kumar would visit the home of Brajesh Thakur. “Why did he not lodge an FIR against this monster and when it was later done, why wasn’t it under the POCSO Act?”

1,550 people are talking about this
Yadav also wrote requesting the Governor of Bihar that should the complete involvement of the Nitish Kumar-led government in the Muzaffarnagar rape case be found, this “immoral” government be dismissed with immediate effect. 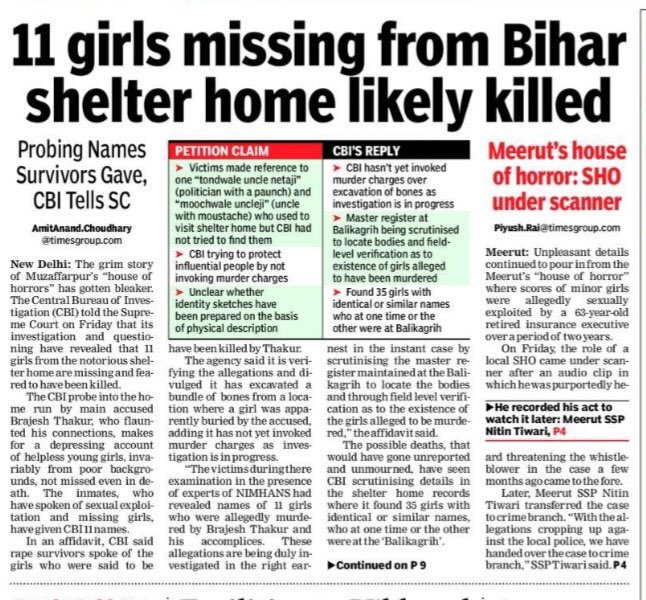 517 people are talking about this
Twitter Ads info and privacy
“During investigation, from the statement of victims recorded by IOs (investigating officers) and NIMHANS (National Institute of Mental Health and Neuro-Sciences) team, names of 11 girls emerged who were said to be allegedly murdered by the accused Brajesh Thakur and his accomplices,” the CBI told the apex court on May 3 in a affidavit, adding, “Based on the facts revealed by one accused, namely Guddu Patel during his interrogation, a particular spot in burial ground as identified by accused Guddu Patel was excavated and a bundle of bones were recovered from the spot.”


A Tata Institute of Social Sciences report had revealed last year that dozens of minor girls were sexually assaulted by Thakur and his accomplices. Manju Verma, a minister at the time in the Nitish Kumar government, is also an accused in the case.-NC