PM Modi has never backed his pious words about minorities with action. Much more than his followers, it’s the PM who needs to be watched. 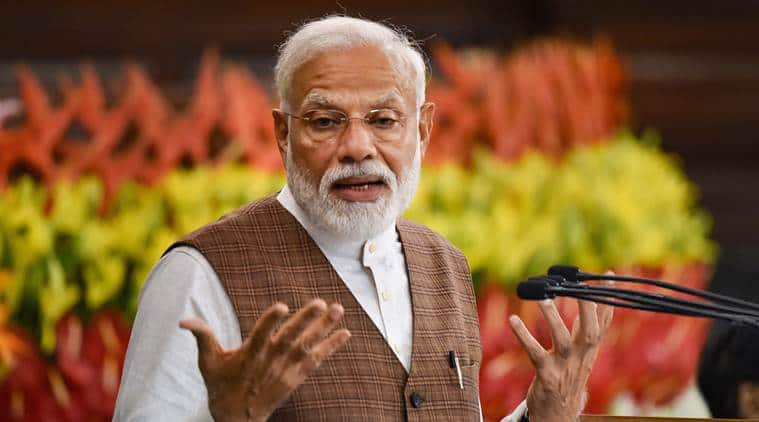 Returning to the immediate context of the PM’s speech, it was only right that the rest of the editorial explained that the feeling of fear and persecution among minorities was not a product of their imagination. (PTI Photo/Manvender Vashist)

Among other things, he said the new government would make efforts to earn the trust of minorities, and of those who disagree (with the BJP-NDA). He urged the newly elected MPs to puncture the ‘myth’ or illusion of fear among the country’s minorities… these are statements of inclusive intent.” (‘Weight of words,’ IE, May 27)


The editorial rightly asserted that we need more to be reassured. This implies that such statements should be backed by actions. Yet, the word “magnanimous” was particularly hurtful and cruel. Assurance of inclusion to the minorities is not an act of large-heartedness in a secular democracy. It is not something granted to them by the majority. It pertains to rights that flow from the Constitution — and not the intent of the rulers. The use of the word, “magnanimous” cannot be ascribed to carelessness or a lapse of attention.

One would like to believe that the word was used to convey irony, since it expresses the state of helplessness of those who believe in secular principles in India — we are expected to be thankful or grateful to those being generous to us. Is this not what the minorities have been told all along? Not only by the RSS but even by well-intentioned people who hold that India is secular because of its Hindu majority. It is the catholicity, diversity and openness of Hinduism which has made secularism the most natural state-principle in India.

Returning to the immediate context of the PM’s speech, it was only right that the rest of the editorial explained that the feeling of fear and persecution among minorities was not a product of their imagination.

While it is right to ask Modi to rein in his leaders, and also mind his tongue, it would have been better if he was reminded of his own words after his first victory in 2014. Even that time, he was magnanimous to the minorities in intent. Was that translated into action?

Should it take a faraway voice to tell us that the leader himself was the source of fear and also the justifier of the persecution of minorities, especially the Muslims? Did he not lead his ministers and members of his party in making the Muslims figures of hate? Did he not make them the other that the Hindus should dread?

It was not just the desperation of electioneering which drove him towards it. The past five years bear ample proof that it was he and his party president who instigated the desire to dominate among the Hindus. Who, after all, were to be dominated?

It was not only his silence on the hate crimes against Muslims and Christians but his incitement for Hindu mobilisation, which was most threatening to the minorities. This includes the scaremongering in Gujarat about Muslims during the assembly elections in 2017.

The Muslims are thus allowed to vote but not aspire to lead. It is the pleasure of the majority Hindus they should try to earn. This is the message that the first Modi regime has effectively conveyed to Muslims: They need to follow the rules framed by the Hindu majority, that too in the language framed by the BJP and its affiliates.

More than physical violence, it is this feeling of being dominated and disciplined by a patron, which is humiliating to the Muslims. It is unacceptable that Hindus — however largehearted — should be the big brothers of Muslims.

Mahatma Gandhi had asserted that Muslims are not the vassals of Hindus. It was this insistence of the Mahatma that led to his murder. We must not forget this foundational principle of the Indian republic. It is this principle which has been repeatedly violated not just under the watch of PM Modi but he himself is a repeat offender in this respect.

Modi has also maligned and criminalised the language of rights — the language which human rights workers tried to use while combating his majoritarian project. He denigrated them as five-star activists and called them the Khan Market gang, while his ministers hounded them by calling them the tukde tukde gang.

One sometimes feels that we are so embarrassed about the prime minister that we try to live in denial. We tend to believe that the leader does have noble intents but is troubled by his unruly followers. We ignore that it is he who follows the lumpens. It is he who fashions and instigates the majoritarian instinct in the Hindus. So, much more than his followers, it is Modi who needs to be watched for his words and actions and held accountable at each step.

Modi is a master of the art of deception. Or, it would be more correct to say that he is both transparent and crude in his deceptive acts. It is actually the media and analysts who are looking for ways to justify him. Or is it the popular mandate that inhibits us in calling him by his name?

Do we disrespect the people when we say that the leader they have chosen has been violating the oath he has taken in the name of the Constitution? Sadly, the last stint of Modi proved that his instincts are contrary to the Constitutional values. Therefore, we have no reason to applaud his patronising words now.

The minorities have survived the worst phase of their existence in Independent India. The question now is whether the republic itself will survive another five years under the same leadership. So, it would be our duty to keep calling people by their names and not clothe them in words which express our pious wishes.