In Osaka, a wiser Modi has emerged – one who didn’t make the mistake of leaping to hug the reluctant Trump

Osaka will be remembered for the manner in which Modi bit his tongue at Trump’s rude remarks and went on to calmly talk to the world’s most powerful leader. 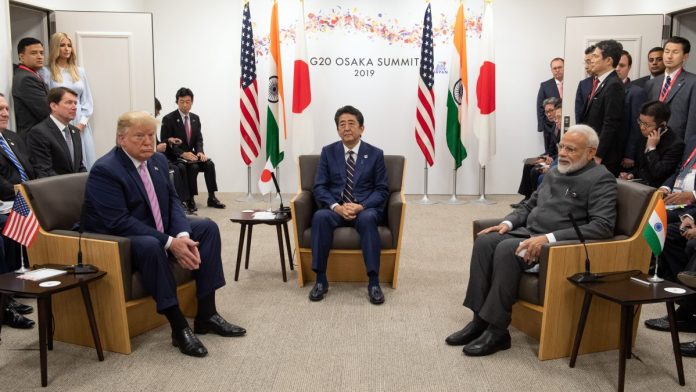 
It’s been a lot of fun, being with you, we’ve had some good talks already…” said US President Donald Trump to Prime Minister Narendra Modi Friday morning in Osaka on the margins of the G-20 summit.

If that sounded like Teacher Trump telling a recalcitrant student off, then you got it right. In the TV screen grab, Modi is quiet, as he turns his notes over in his hands, while Trump speaks nonstop sitting next to him.

“You deserve it (victory). You have done a great job in pulling together. I remember when you first took over, there were many factions and they were fighting with each other and now they get along…” Trump continued.
Even if you didn’t vote for Modi this election, he definitely had your sympathy.

Certainly, the real estate dealer-turned-powerful world leader didn’t seem to have realised that he was treating the Prime Minister of 1.3 billion people with a certain lack of grace. Trump redefines the meaning of the phrase, ‘The Ugly American,’ not because he is loud, boorish, cruel and unkind, but because he doesn’t even realise he is all of the above.
It’s probably why Modi reacted with a certain peevishness when he and Trump brushed up against each other the first two times they met – the first time in June 2017, in the White House, when Modi tried to hug him, as he is wont to do with world leaders, except Trump seemed totally uncomfortable with the idea of a male embrace.

The second time around, in November 2017, on the margins of an ASEAN summit in Manila, Modi and Trump got off the wrong foot because the PM felt Trump had treated him “like just another Asian leader.”
You can see why. Trump must have brushed off the obvious eagerness of the Indian Prime Minister, like so many other Third World leaders are wont to do in the presence of Powerful People.
Except India isn’t just another Third World country – a lesson that Trump’s predecessor George Bush Jr (he didn’t know who India’s prime minister was when he was the Republic frontrunner in 1999 presidential elections) and Barack Obama (he was extremely tough on India’s nuclear weapons programme and wanted India to sign the NPT) learnt fairly quickly when they met India’s political leaders and diplomats. Both Bush and Obama came around over the years, both realising the value of partnering with a democratic country in a region littered with dictators.
This time around, Modi didn’t make the mistake of hugging Trump. He assumed the quiet dignity of his office, which represents 1.3 billion people – even if you didn’t vote for him – and let Trump ramble on and on. The US president revealed his gracelessness in the manner in which he addressed PM Modi. Modi dealt with his loquaciousness by simply keeping quiet.
Both Modi and Trump know that their foreign office establishments have been working really hard to put together a meeting in Osaka, keeping some margin for error. Like the Mike Pompeo throwaway remark on Iran being “the world’s largest sponsor of terrorism” in his New Delhi press conference – remarks to his own audience back home rather than the one in front of him – or Trump’s irresponsible tweet on the eve of his meeting with Modi, telling Modi that he has to withdraw tariffs on American products, or else.
Well, some of that will happen. It’s bound to. But the stakes for India in the relationship with the US are far too important to be allowed to fray at the sight of an offensive tweet – and vice-versa. Trump may or may not know it, but India is doing far more than most countries in the world for the Americans, by just being there, a massive country in the Indian Ocean, right next to China.
In the next few weeks, the Indo-US relationship will stabilise. The US is working to send a delegation to Piyush Goyal’s commerce ministry to figure out how to reduce tariffs that have so irked the US president. It’s not a big deal. What you put on, you can easily take back.
Osaka will be remembered for the manner in which Modi bit his tongue at Trump’s rude remarks and went on to calmly talk to the world’s most powerful leader. He vindicated the trust that India put in him, which was to separate the all-important relationship with the US from the personal careless disregard that Trump may or may not have for Modi.
Can the cat catch mice, Deng Xiaoping may have asked himself time and again, as he embarked upon the opening up of China in 1978. Modi faces several important struggles back home, including facing up to Right-wing ideologues like S. Gurumurthy on issues like data sovereignty, but he also realises that India is once again on the cusp of a big dilemma. Should it look ahead into the future or look back at its contested history?
Modi is keenly aware that the ability to answer that question also, partially, lies in his hands. On the eve of his Japan visit, he called for the punishment of those men lynching Muslims in Jharkhand. That statement was not only meant for the foreign audience that he was about to meet, but for his own people at home, those who have been fed on a relentless anti-Islam diet.
The weeks and months ahead will show the path that Modi and India chooses.-The Print