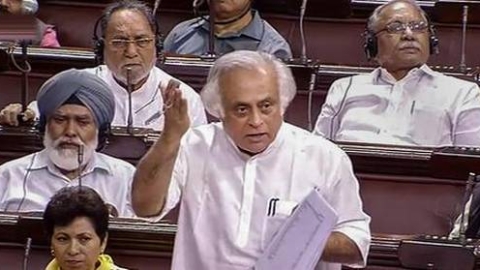 Raising the issue in the Rajya Sabha during the Zero Hour, Jairam Ramesh cited media reports which said that around 400 acres of forested common lands in different villages falling in the Aravallis ecosystem have been illegally purchased by a private entity. The purchases took place between 2014 and 2016.


“Why should these purchases concern us? First, these purchased lands are hilly forests that should have been protected following the Supreme Court’s order of December 1996 that defined the criteria for forest lands,” Jairam Ramesh said without naming the firm
.

“Second, in January 2011, the Supreme Court had directed that all village common lands should be made free of encroachments and returned to gram panchayats so that they could be used for their intended purposes. The purchases violate this order,” he added.

He underlined that while in February this year the Haryana Assembly amended the Punjab Land Preservation Act, 1900 to permit all kinds of construction activities in the Aravalli hills, a month later the supreme Court called these amendments a “misadventure” and ordered the state government to hold off implementing the amendments.

“The ecological value of the Arvallis hardly need any emphasis. I urge the Ministry of Environment, Forests and Climate Change to take an uncompromising position on the protection of the Aravallis and ensure that the purchases made illegally are cancelled,” the former minister said.

The Business Standard had carried a report last month, revealing as to how the Patanjali group of yoga guru Baba Ramdev circumvented the restrictions put in place on sale of common lands in the Aravallis and procured around 400 acres in Kot village under more than 300 power-of-attorney agreements.

Kot is a small village located on the state highway connecting Gurugram and Faridabad. About 80 per cent of the village land is classified as ‘Gair Mumkin Pahad’ where cultivation and development are not permitted in Haryana.-NH