There are confirmed intelligence reports that terrorists backed by the Pakistan Army are trying to disrupt the Amarnath Yatra, the army said today. 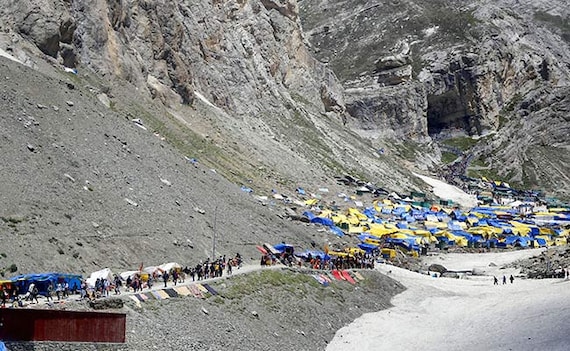 Amarnath Yatra 2019: A landmine and a sniper rifle were found on the route of the pilgrimage today (File)


SRINAGAR: Amarnath Yatra pilgrims and tourists have been asked by the Jammu and Kashmir government to "immediately" cut short their stay in the Kashmir Valley and go back, in an unprecedented advisory amid intelligence inputs of terror threats. Pilgrims and tourists have never before been urged to leave Kashmir, which has seen a massive build-up of troops over the past week.

"Keeping in view the latest intelligence inputs of terror threats, with specific targeting of the Amarnath Yatra, and given the prevailing security situation in the Kashmir Valley, in the interest of safety and security of the tourists and Amarnath Yatris, it is advised that they may curtail their stay in the valley immediately and take necessary measures to return as soon as possible," the state government's notice said.

The government had assured pilgrims earlier that the Amarnath Yatra was safe and well-protected.
The advisory was put out shortly after the army and the Jammu and Kashmir police, in a joint press conference, said there were "confirmed intelligence reports" that terrorists backed by the Pakistan army were trying to disrupt the Amarnath Yatra. Mines and ammunition recovered along the route had confirmed the "direct involvement of the Pakistan Army", they said.

A landmine with Pakistan ordnance factory markings and an M-24 American sniper rifle with a telescope had been found along the route of the annual pilgrimage to the Hindu cave shrine around 140 km from Srinagar.
"In the last three-four days, there were confirmed intelligence reports that terrorists backed by Pakistan and its army is trying to disrupt Amarnath Yatra and based on that a thorough search was conducted. We had major successes in these searches," said Chinar Corps Commander Lt General KJS Dhillon.

According to the officer, there was a "massive threat of IEDs (Improvised Explosive Device)" and bombs had been found in searches along the Amarnath route.
The yatra route had been "sanitized for three days", he disclosed.
"The searches are still going on. The Pakistan Army is desperate to disrupt peace. This will not be allowed to happen. No one can be allowed to disrupt the peace," said Lt General Dhillon.
Over the past few days, the movement of central paramilitary personnel who are being airdropped in sorties, has fueled speculation about security threats in Kashmir.
Some 10,000 central personnel were ordered to the state about a week ago and reports suggest more have been sent since then. The reports of a surge in troop deployment coincided with inputs of a terror strike around August 15 Independence Day celebrations. On Thursday, the centre reportedly sent over 25,000 more troops to Kashmir, fueling speculation that something major was afoot.
On the advisory, former Jammu and Kashmir Chief Minister Mehbooba Mufti said she hoped "like always Kashmir isn't used as a red herring to distract masses from real issues. Such a move will have catastrophic consequences and push Kashmiris to the brink."
Her predecessor Omar Abdullah tweeted: "Although this unprecedented order would seem to suggest a genuine fear of a massive terror strike directed at Amarnath ji yatris or/and tourists this will do nothing to dampen the sense of fear and foreboding that prevails in the valley at the moment."
The ruling BJP's Jammu and Kashmir chief Ravinder Rana, oddly, said the Yatra "will continue till August 15 as scheduled" and denied any atmosphere of fear.
The last time Kashmir saw such heavy presence of troops was after the Pulwama terror attack in February, in which 40 Central Reserve Police Force soldiers were killed by a suicide bomber of the Jaish-e-Mohammad.-ndtv