In 1984, after the assassination of Prime Minister Indira Gandhi, the sympathy wave helped the Congress led by her son Rajiv Gandhi win more than 400 seats in parliament. 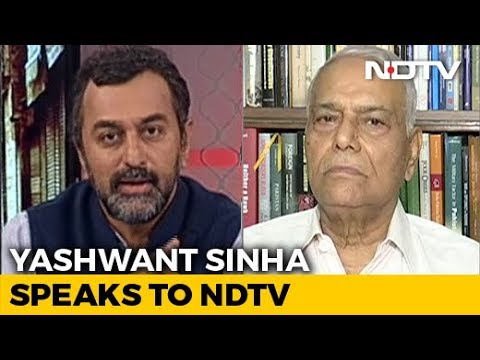 Ending the special status given to Jammu and Kashmir would further alienate people of the state but if national elections were held any time soon, the populist step would win the BJP a bigger victory than even Rajiv Gandhi's landslide in 1984 following the assassination of mother Indira Gandhi, Former Finance Minister Yashwant Sinha said on Monday.

A former BJP leader and one of the most vocal critics of Prime Minister Narendra Modi in the months before this year's national elections, the 81-year-old chided the government for ending provisions under Article 370 of the constitution and splitting Jammu and Kashmir into two union territories with bills pushed through parliament.

The decision was a "pure political step" with "nothing to do with Jammu and Kashmir" he said, but when asked how many seats would the BJP win if an election were held a day after provisions under Article 370 were scrapped, he told NDTV, "They (BJP) will beat Rajiv Gandhi's record."
In 1984, after the assassination of Prime Minister Indira Gandhi, the sympathy wave helped the Congress led by her son Rajiv Gandhi win more than 400 seats in parliament.
"What the government of India has done with Article 370, and Article 35A, is nothing more than pure politics... There are state elections coming in some very important states of India, and this whole thing has been done in order to be able to win the elections," Mr Sinha said.
He compared the moves on Jammu and Kashmir to a shock ban on large-denomination currency notes in 2016 that was criticised by most economists but found favour with voters who saw it as a crackdown on "black money" or ill-gotten wealth.
"Demonetisation was not an economic step. It was also a political step. Similarly this is also a political step... It has nothing to do with Jammu and Kashmir, because if it had then the Jammu and Kashmir people would have been taken into confidence," Mr Sinha said.
The centre on Monday moved to revoke special constitutional privileges given to Jammu and Kashmir, thereby scrapping its semi-autonomous status, and divide the Muslim-majority state into two federally administered regions. It was met with accusations that the government had bulldozed the decisions, not allowed enough discussion in parliament or even time to scrutinise the bills before they were put to vote.
While the government said the goal was to fully integrating the region with the rest of country and counter terrorism, opposition parties led by the Congress said it will have far-reaching political and social consequences and can trigger unrest in the state.-ndtv