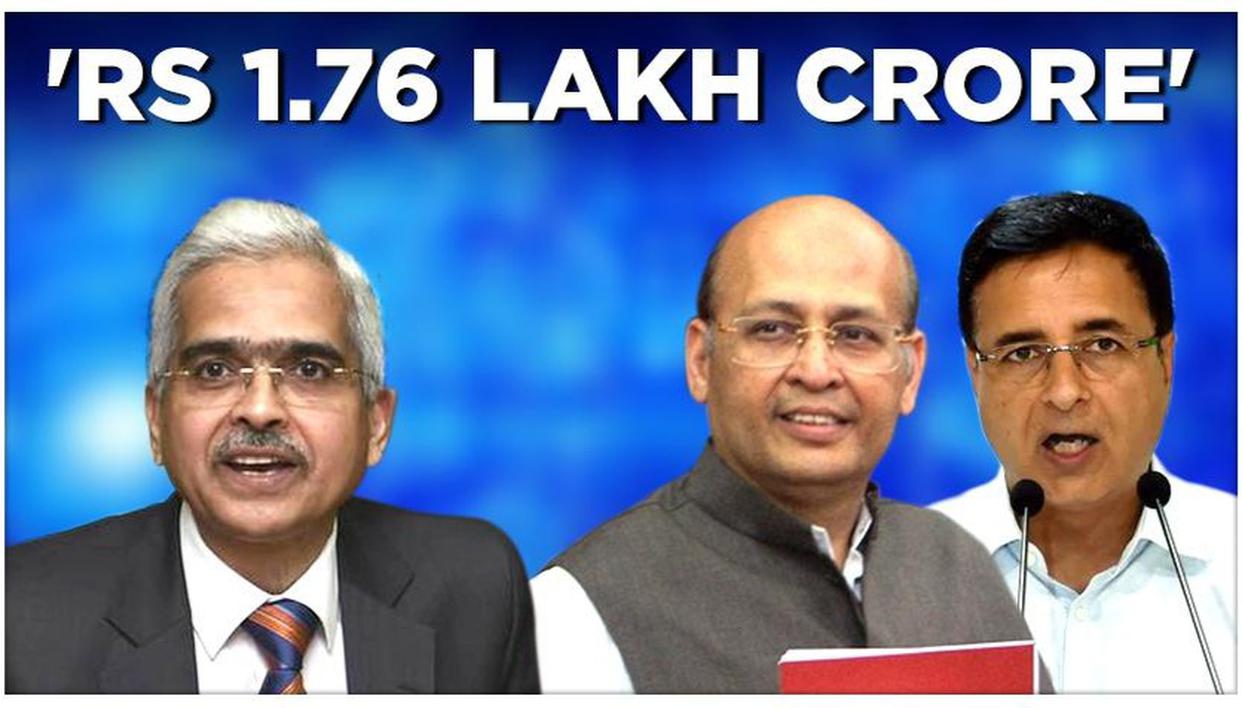 The Congress has attacked the Modi government over the RBI's approval for the transfer of a record Rs 1.76 lakh crore dividend and surplus reserves to the Centre which will assist India in stimulating the economy without widening the fiscal deficit - a topic of discussion that first arose late last year when the central bank's excess capital became a topic of discussion.

Taking to Twitter, Randeep Surjewala alleged without substantiation that it would be used for corporate bailouts, giving it a 'crony capitalism' angle:

Is it a sheer coincidence that the ₹1.76L Cr borrowed by RBI matches with the 'Missing' amount in the Budget Calculations?
Is this fiscal prudence or fiscal hara-kiri?
Will this ₹ 1.76 L Cr be used to save BJP's crony friends?
- Randeep Surjewala

Abhishek Manu Singhvi also attacked along similar lines, going on to call the RBI's Bimal Jalan-led committee that presented a report on the transfer of excess capital a 'rubber stamp':

152 people are talking about this
Singhvi went on to make a 'Sacred Games' reference on the matter, claiming that the surplus capital was an obsession:

1.76 Lac Crore could be an imaginary obsession culminating from something Prgya's Guruji said after Gochi. Heard too much of it already.

150 people are talking about this

Governor Shaktikanta Das-led RBI central board on Monday gave its nod for transferring to the government a sum of Rs 1,76,051 crore comprising Rs 1,23,414 crore of surplus for the year 2018-19 and Rs 52,637 crore of excess provisions identified as per the revised Economic Capital Framework (ECF), the apex bank said in a statement.
The excess reserve transfer is in line with the recommendation of former RBI governor Bimal Jalan-led panel constituted to decide size of capital reserves that the central bank should hold. The government was represented by Finance Secretary Rajiv Kumar in the panel which finalised its report on August 14 by consensus.

A monetary boost for the Government

The receipts from the RBI will give a fillip to the government's efforts to boost the economy from a five-year low. Finance Minister Nirmala Sitharaman had last week announced a slew of measures to prop up growth even as the government tried to stick to the target of keeping fiscal deficit at 3.3 per cent of the GDP. The additional cash will now give the Centre more headroom for stimulating the economy.
The Modi government and the RBI under its previous governor Urjit Patel had been at loggerheads over the optimum level of surplus capital with the central bank.
As a result, the RBI in its crucial November 2018 board meeting decided to form a committee to review the economic capital framework (ECF) for the Reserve Bank.
Credit Republic World