Two chest-beating men, Narendra Modi and Bear Grylls failing to listen to each other, sniff elephant dung in the wilderness while a terror attack plays out in Kashmir. The programme went out days after Modi imposed direct rule over the disputed region. God help us all 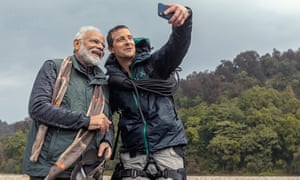 
Chitra Ramaswamy @Chitgrrl
1/5stars1 out of 5 stars.
In this monstrous propaganda stunt, strongmen Bear Grylls and Narendra Modi sniff elephant dung in the wilderness while a terror attack plays out in Kashmir. God help us all


In the foothills of the Himalayas, the heavens open and toxic rain drills the earth of Jim Corbett national park. Bear Grylls is pacing like a … No! Stop! Resist the Grylls compulsion to reverse anthropomorphise. Like a … posh white ex-SAS soldier-turned-“survivalist” exaggerating jeopardy for the sake of his TV series (on Discovery Channel). Better. He has got “pre-match nerves”. This is what happens when “two men and a bunch of Secret Service meet in the jungle surrounded by tigers”. And the other man squaring up to the wild happens to be the prime minister of India.


Hours later, the motorcade appears carrying the far-right nationalist leader once widely rebuked as a Hindu supremacist, but now a perfectly palatable subject for the Grylls treatment. Come on, Grylls took Barack Obama to Alaska. In the reign of false equivalence, why not Narendra Modi?

Grylls gestures them along the track, a lone white man directing traffic in an otherwise unpeopled Indian landscape. Actually, the way he ushers the prime minister into his own national park is reminiscent of our testosterone-fuelled PM doing his utmost to shepherd Scotland’s first minister through her own front door last month. Oh, deluded machismo. No matter the environment, there is no camouflaging your condescending stripes.

“India is a country full of diversity,” the prime minister announces, when he can get a word in between Grylls whitesplaining India to him. “A hundred languages, 1,600 dialects ...” Never mind that this is from a leader implicated in the 2002 Gujarat massacre, in which more than 1,000 people, mainly Muslims, were killed, mutilated and raped. This is Modi the sage and nature lover who reminds us, as Grylls hands him a spear fashioned out of bark and virility, that his beliefs don’t allow him to kill.

It is hard to think of a more monstrous exemplar of our times than this Putin-style propaganda exercise, both praised and ridiculed when it aired in India earlier this week, masquerading as, well, what exactly? Entertainment? News?

One wants to say what next, but the truth is this is it. We have arrived at the inconceivable and it looks like Grylls and Modi were sniffing elephant dung in the north Indian wilderness while, reportedly, a terror attack played out in Kashmir.

The programme went out days after Modi imposed direct rule over the disputed region. His government now stands accused of acting without legal authority by revoking Kashmir’s special status. So even though one has used up all the synonyms for “unconscionable” in the thesaurus, when the unspeakable keeps on coming, so too must the words.

The strongmen set off on an adventure that, unfortunately, none of us will forget, crossing five miles of grassland teeming with tigers, “the absolute ninjas of concealment”, as Grylls calls them. Not one is seen. Perhaps the ninjas of concealment are repelled by the swarm of camera crew, Secret Service, and the sight of two chest-beating men failing to listen to each other. Anyway, that doesn’t stop Grylls from banging on about how dangerous the enterprise is. “You are the most important man in India,” he gushes. “My job is to keep you alive, sir.”

They sail across a freezing river on a makeshift raft, plunging deeper into the mythical land of Modi’s self-image. We hear about his impoverished childhood; his teens spent learning from yogis in the Himalayas; and the 13 years as chief minister of Gujarat, during which the massacre took place, before “my country decided I needed to do this job”.

We hear how this perilous hike, in which the only real danger lies in the loss of one’s moral compass, is Modi’s first holiday in 18 years, and how he has never felt fear, which is truly terrifying. “In my mind it never occurs to me who I am,” he says. “I am above all this.” To which Grylls can only sigh: “You’re an inspiration.”


They talk about climate change, less the problem of governments and more about our lifestyles because: “We exploit nature for our own enjoyment.” Over neem tea, they decide that it is up to the people of India to sort it out. Finally, it is time for the leader of the largest democracy in the world to return to his chopper.

“Before we go, could you allow me the privilege to say a little prayer for you,” Grylls asks. And he gives thanks, “for this great man and this great country”. He attempts a joke about the prime minister’s underpants. And I, a Hindu by birth and an atheist by experience, found a prayer forming on my lips. God help us all.-The Guardian