"You Have Paid Price For My Decision": Ex-Cop Sanjiv Bhatt To Family

In his letter, Mr Bhatt praised his wife, Shweta Sanjiv Bhatt, for her "amazing grace and fortitude" in facing the challenges his actions had posed to her and their family


NEW DELHI: Sanjiv Bhatt, the Gujarat-cadre IPS officer who took on Prime Minister Narendra Modi over the 2002 riots and in June was sentenced to life in prison in a 30-year-old custodial death case, has written an emotional letter to his wife and children. In the letter, which he addresses from "the heart of darkness", he thanks his family for helping him "become everything that I needed to be for serving a cause that was larger than all of us".


"Whatever I am today is only because of you. You have been my strength and my inspiration. You have been the fuel that kept the furnaces of my passion and idealism burning against all the odds," Sanjiv Bhatt wrote to his wife, Shweta Sanjiv Bhatt.

Mr Bhatt, 55, has had several run-ins with the BJP over the post-Godhra riots, alleging that Narendra Modi, then Chief Minister of Gujarat, was complicit in the affair. PM Modi, who took over as prime minister after winning the election last year, has never been found guilty and has denied any role in them.

He also faces charges in a drug-planting case from 1996,  that he wrote was built on "completely fabricated evidence", in addition to the 1989 custodial death case. 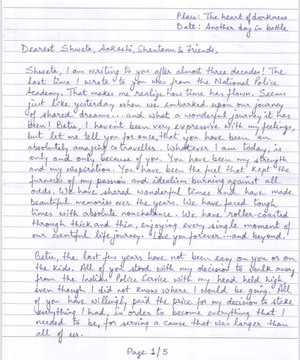 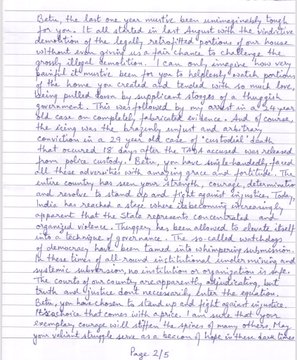 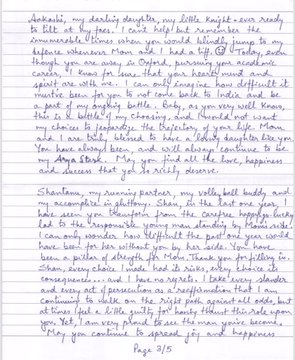 1,843 people are talking about this
"... the last few years have not been easy on you or the kids. All of you have willingly paid the price for my decision to stake everything I had, in order to become everything that I needed to be for serving a cause that was larger than all of us," he wrote.

In his letter, Mr Bhatt also apologised to his wife for having had to watch "helplessly (as) portions of the home you created and tended to with so much love" were demolished.
Portions of Mr Bhatt's house had been demolished last year after the Ahmedabad Municipal Corporation declared it illegal.
"You have single-handedly faced all these adversities with amazing grace and fortitude. The entire country has seen your strength, courage, determination and resolve to stand up and fight against injustice," he told his wife.
Sanjiv Bhatt also addressed his children, thanking his son Shantanu for standing by his mother's side. "I can only wonder how difficult the past one year would have been for her without you by her side," he said.
"I can only imagine how difficult it must've been for you... I would not want my choices to jeopardise the trajectory of your life," he wrote to his daughter Aakashi.


The last page of his five-page letter was dedicated to "brave friends and supporters who have stood by me and my family in these dark times".
"Each one of you has not only inspired me to my best, but has also been the source of much-needed strength for Shweta. There are dark times for Indian democracy. The choices we make today will determine our fate for the next few decades," he wrote in conclusion.
-ndtv