‘Your pride, my pride, 370, 370’: In Kashmir, fear has started giving way to protests,black flags and anger.

The initial panic and fear are now gradually being overtaken by the sense of being deceived and by anger. Security forces and stone-pelting youth faced off in some parts of downtown Srinagar.Inside hospital wards, there are teenaged boys with pellet injuries. Outside, black flags and anger. A member of the Indian security forces patrols a deserted road in Srinagar during restrictions after the government scrapped special status for Kashmir. | Danish Ismail/Reuters

On August 4, 38-year-old Abdul Hameed , who works as a labourer, had travelled from Kupwara district in North Kashmir to Srinagar to meet his cousin, who had been admitted at the Sher-E-Kashmir Institute of Medical Science.He says he has learned a lot about the law in the last couple of days, through conversations with attendants at the at the hospital.

Article 370 guaranteed Jammu and Kashmir a degree of autonomy within the Indian constitution. On August 5, Union Home Minister Amit Shah announced the Centre was scrapping special status and autonomy guaranteed to Jammu and Kashmir under the law and revoking Article 35A, which empowered the state government to define “permanent residents” of the state and reserve specific rights for them, including the right to own land. The government also announced it was dividing the former state into two Union Territories.


Hameed believes India has done Kashmiris a grave injustice by revoking the state’s special status. He also feels that there is going to be a threat to the Muslim identity of the region, a sentiment reflected among many in the Valley after the home minister’s announcement.

Protests begin
The initial panic and fear are now gradually being overtaken by the sense of being deceived and by anger. Security forces and stone-pelting youth faced off in some parts of downtown Srinagar.

While travelling around the city, this reporter met a group of young boys hurling stones at troops in the Habba Kadal locality in downtown Srinagar. The locality takes its name from a bridge, or kadal, spanning the Jhelum. The boys had barricaded a road with sandbags and rocks to stop security vehicles stationed at the bridge from passing through and chasing them.

“We are forced into fighting this one-sided battle by India,” said one of the boys from the group as Central Reserve Police Force personnel fired tear gas shells. “We know we can’t achieve anything by pelting stones. But this is the only thing we can do to raise our voice.”

Similar scenes were witnessed at the Eidgah locality. At the barricades set up near the historical Ali Masjid, troops chased stone-pelting youth and stopped civilians from moving towards Sri Maharaja Hari Singh Hospital.

A young bank employee who was scheduled to fly to Delhi for a meeting was held up at the barricade. “I have come from Lal Bazar and I have had to cross at least a dozen such checkpoints,” he said. “At one stop, they only let me go through when I told them I can help them get personal loans. They took my visiting card. It’s funny and scary at the same time.”

On August 6, there was a protest rally in the Ellahi Bagh area of Srinagar. The crowd waved black flags and shouted anti-India slogans. “Tchoun yezath, mouyan yezath, 370, 370 [your pride, my pride, 370, 370],” they shouted.

Later in the day, Asrar Khan, a Class 11 student, received serious head injuries after being hit by tear gas shells and pellets allegedly fired by Central Reserve Police Force troops. Two other young boys also received minor injuries in the incident. Another young teenage boy from the same locality was also detained by the Central Reserve Police Force, residents claimed. He was released later that night.

Scroll.in asked a CRPF spokesperson in New Delhi for a response about these incidents. He said he did not have any information about them.

In various parts of the city, groups of youth also asked labourers from other parts of India to leave immediately or face the consequences. Although there was no violence, many decided it was time for them to leave. Mohammed Fareed from Uttar Pradesh, who had set up a barber’s shop in Srinagar 16 years ago, cried as he packed his bags. “I have set up multiple shops here with god’s grace,” he said. “Kashmir always will be like a second home for me. So I will be back when things normalise. I have friends here and I can relate to their pain right now.”

Faheem, a PhD student at the University of Kashmir, who lives on the outskirts of Srinagar, believes the Indian government’s unilateral decision to revoke special status will have long-term implications for Kashmir.

“This move by the government of India and the way it was carried out will further the level of alienation among Kashmiri people,” he said. Contrary to government claims, the 30-year-old feels, the decision will feed an Islamist ideology in Kashmir. Many who wanted freedom from the Indian government did not accept even Article 370. But these constituencies have been further galvanised now.

“You have to understand a lot of people in Kashmir refuse to recognise the Indian Constitution,” Faheem said. “For them, the position has not changed at all. However, today they are vindicated in their stand that Kashmiris can’t find justice in Indian democracy.”

Night at the hospital
Minutes after arriving at the Sher-i-Kashmir Institute of Medical Science, Asrar Khan, the Class 11 student hit by tear gas shells and pellets, went into emergency surgery after CT Scans revealed massive internal bleeding in his head. The surgery ended past midnight but doctors could not assure his family that he will survive. They believe he is likely to lose his eyesight. 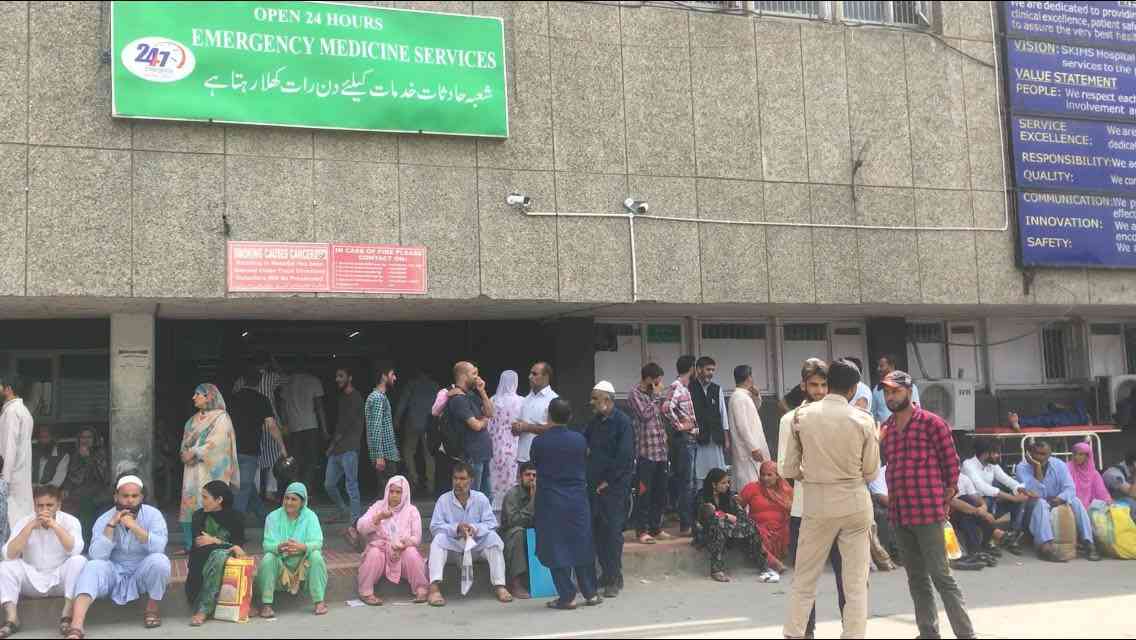 The attendants of patients wait outside the Sher-E-Kashmir Institute of Medical Science in Srinagar. Photo: Adnan Bhat

Lying next to Asrar, in the same ward, was another young boy who had severe lacerations in his chest from pellets allegedly fired at close range. According to a hospital official, who wished to remain anonymous, seven to eight people have been brought to the hospital with wounds from tears gas shells or pellets in the last few days.

Outside the ward, among family members and relatives of the injured hung about in sombre silence. Until a loud shriek broke the silence. Then some people at the hospital shouted slogans for “azadi”. They were soon joined by others. Later, the group hoisted a black flag outside the emergency ward to protest against what they called “the ongoing atrocities against Kashmiris”.

Meanwhile, Hameed was growing more anxious by the minute as he heard of speculation that there would be a flare up between India and Pakistan at the Line of Control. Kupwara district lies along the troubled frontier. Hameed convinced an ambulance driver to drop him close to Lal Chowk, the city centre. From there, he hoped to hitchhike his way home.

“We are a joint family so I know there is someone to look after my kids and wife,” he said. “But I don’t want to be away from them in these tough times.”—Scroll.in