"I think they (India and Pakistan) would in a certain way like my help," US President Donald Trump said. 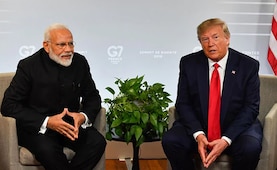 
NEW DELHI:US President Donald Trump on Tuesday once again made a pitch to help resolve differences between India and Pakistan, in the fourth offer at mediation which New Delhi has strongly opposed so far. The offer came just hours before he is set to meet Prime Minister Narendra Modi for bilateral talks in New York.


"I think as far as Pakistan is concerned, India, they're talking, I'm certainly willing to help. I think they would in a certain way like my help. But they've to both want it. They have very different views and I'm concerned about it," he told reporters ahead of his address to the UN General Assembly.

The statement comes less than 24 hours after Mr Trump, with Pakistani Prime Minister Imran Khan by his side, renewed his offer of arbitration on Kashmir.
India responded curtly to the offer, saying its position - that there can be no third-party mediation - is known.
The Foreign Ministry urged the media to wait for Tuesday, when President Trump and Prime Minister Modi will meet.
Addressing a joint briefing before his talks with Imran Khan, President Trump said if India and Pakistan wanted him to mediate on Kashmir, he was "ready, willing and able".
"If I can help, I will certainly help... If both (India and Pakistan) want, I am ready to do it... I have very good relationship with Prime Minister Modi. I have very good relationship with Prime Minister Khan... I would be an extremely good arbitrator. I have never failed as an arbitrator," said the US President, despite India rebuffing the suggestion twice before.
His latest offer to mediate came a day after he shared a stage with Prime Minister Narendra Modi at "Howdy, Modi!", a huge public event in Houston.
Mr Trump's first offer also came when he was addressing the media along with Imran Khan in July. He had then claimed that PM Modi had asked him whether he would like to mediate on Kashmir. Foreign Minister S Jaishankar had then categorically denied that the Prime Minister had ever made such a request.
In August, PM Modi himself made India's stand clear, with President Trump right next to him. "There are many bilateral issues between India and Pakistan, and we don't want to trouble any third country. We can discuss and resolve these issues bilaterally," he said, addressing the media with President Trump before their talks on the sidelines of the G-7 summit--ndtv