Student Who Accused Chinmayanand Of Rape To Stay In Jail, Bail Denied

Chinmayanand Case: The law student's arrest comes a day after a court in Uttar Pradesh's Shahjahanpur agreed to hear her request for protection from arrest 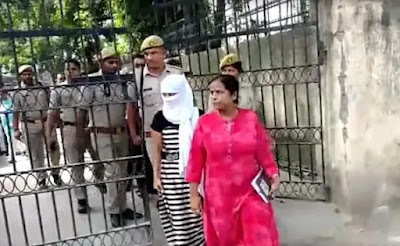 
SHAHJAHANPUR, UTTAR PRADESH: A young law student in Uttar Pradesh, allegedly raped by former union minister Chinmayanand for a year, was arrested and jailed today in an extortion case filed by the politician. Her family alleges that the police dragged her out of their home in Shahjahanpur, not allowing her to even put on her slippers.


The 23-year-old has been charged with extortion, criminal intimidation and "disappearance of evidence". Her father alleges he was forced to sign an arrest "memo", a document necessary for police paperwork.

Her request for bail was denied by a court.
"She has confessed to extortion," said Bharti Singh, an officer of the Special Investigation Team (SIT) of the UP police appointed by the Supreme Court to inquire into the student's allegations.

The man she has accused of raping her, 72-year-old Chinmayanand, was arrested on Friday but is not in jail. He has claimed heart ailments and has been in hospital, "under observation", since Sunday.
Asked why the police did not request his custodial interrogation, the SIT said it was not needed as they didn't need to recover anything from him.
The BJP, so far silent on its three-time MP and ex-minister of state for home, claimed Chinmayanand was no longer with the party.
A poster put up just last month outside Chinmayanand's ashram in Shahjahanpur, however, had him with top BJP leaders including Chief Minister Yogi Adityanath.
The woman had accused the police of harassing her and refusing to acknowledge her complaint against Chinmayanand until the case drew media attention.
Yesterday, she was on her way to court when the police dramatically stopped her car, pulled her out and forced her into their vehicle, as if to arrest her. As chaos erupted and the media arrived, the police finally let her go.
The woman alleges that Chinmayanand, who runs several ashrams and educational institutions, sexually exploited her after helping her with admission into his law college last year. He allegedly filmed her taking a bath at the hostel, blackmailed her with the video and raped her. She was allegedly brought to his room at gunpoint and was forced to give him massages, a few videos of which are already in circulation.
The case went public when the student vanished on August 24 after putting up a Facebook post without naming the politician. Chinmayanand's team in turn filed an extortion case. When the UP police tracked her down after a week, the Supreme Court heard her allegations and ordered the SIT to inquire into them.
The police said the politician had "admitted to almost every allegation" and was "embarrassed" about the videos taken secretly by the woman using a camera in her glasses.

"It (spectacles) was brought online in March by the girl. The girl said it was in her hostel room, which was opened in presence of a forensic team, principal, the girl and her father, but it was not found. We are yet to recover it," the SIT chief said.
The BJP leader has been charged under a law on rape but a watered down sub-section that deals with "misusing authority for sexual intercourse"; a charge that carries a punishment of five to 10 years in jail and a fine. A rape charge would have meant seven years in jail extending to a life term. He has also been charged with stalking, criminal intimidation and wrongful confinement.-ndtv