Climate change UN summit: Greta Thunberg is seen fixing US President Donald Trump with an icy stare as he walks in for a meeting on religious freedom, her mouth set in a frown 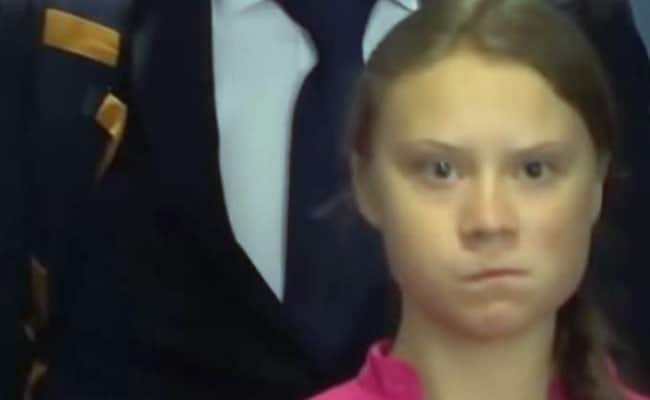 Donald Trump's tweet on teen climate crusader Greta Thunberg provoked many comments on social media today alongside a video in which she is seen glaring at the US President as he walked past her at the UN in New York.
In the video, which is circulating wildly on social media as a GIF, Greta Thunberg is seen fixing President Trump with an icy stare as he walks in for a meeting on religious freedom, her mouth set in a frown.


Earlier that day, the President had snubbed a climate summit. He briefly sat when Prime Minister Narendra Modi was speaking.

Ms Thunberg had made an emotional statement on a panel at the summit, in which she had repeatedly asked world leaders: "How dare you?"
This morning, President Trump posted a video of the powerful speech, in which she talked about "people suffering, people dying, entire ecosystems collapsing" and the fear of "mass extinction".
"She seems like a very happy young girl looking forward to a bright and wonderful future. So nice to see!" Trump tweeted with the video.

She seems like a very happy young girl looking forward to a bright and wonderful future. So nice to see! https://t.co/1tQG6QcVKO
— Donald J. Trump (@realDonaldTrump) September 24, 2019

"I shouldn't be up here. I should be back in school on the other side of the ocean," said Thunberg, who travelled for two weeks on a solar-powered sailboat to reach the United States this month. "Yet you all come to us young people for hope. How dare you," she said, tears in her eyes.
Since he took office, President Trump has repeatedly questioned climate science, pulled out of the Paris climate agreement and has gone about scrapping rules limiting carbon pollution.


On his tweet, many had adverse comments. "Donald Trump picking on an innocent young girl is absolutely disgusting," tweeted one user. "The President of the United States making a sarcastic, snide comment to make fun of a 16-year-old passionate about fighting climate change is a new low for Trump. Disgusting," tweeted another.
But there were also many tweets in his support, like: "MAGA (Make America Great Again)."
Credit-ndtv
Posted by Raj Rishi at 12:42 PM