He also made it clear that Hindu, Sikh, Jain and Buddhist refugees will be accorded Indian citizenship beforehand with the passage of the Citizenship (Amendment) Bill. 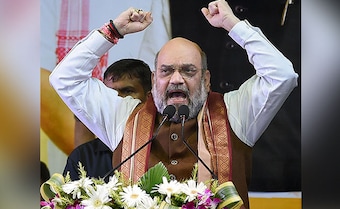 
Union minister and BJP chief Amit Shah on Tuesday declared in Kolkata that the Centre will take the National Citizenship Registry across the country and "no matter how much the Trinamool Congress opposes it, the BJP will get it done".
He also made it clear that Hindu, Sikh, Jain and Buddhist refugees will be accorded Indian citizenship beforehand with the passage of the Citizenship (Amendment) Bill.
In Kolkata to open pandals for Durga Puja, the state's biggest festival, Mr Shah launched a full-scale political attack on the ruling Trinamool Congress and Chief Minister Mamata Banerjee.

The Chief Minister, he said, is keen on keeping infiltrators in the state to expand her voter base.
"Didi used to oppose these same people when they voted for Communists. Now that they are voting for her, she wants to keep them," he said. Accusing the Trinamool chief of putting her party's interest first, he said, "We cannot let national interest come ahead of any party's interest".

"Didi is saying she won't let NRC happen, I want to promise you we won't let a single infiltrator stay. Not one refugee will have to go, not one infiltrator will be able to stay, this is the BJP's promise," added the minister.

Earlier this year, the BJP rolled out the citizens' list in Assam - the implementation was hugely criticized after it was found that it left out 19 lakh people. Even a section of BJP leaders in Assam have criticised it, claiming the list left out a number of Bengali Hindus who were among the party's core voter group.
Last month, Mamata Banerjee had flagged the issue during her meeting with Mr Shah in Delhi and said the exercise was not required in Bengal. "I handed over a letter to him (Amit Shah), told him that of the 19 lakh people left out of NRC, many are Hindi speaking, Bengali speaking and local Assamese. Many genuine voters have been left out. This should be looked into," she had said.
After the rollout of the citizens' list in Assam, Mr Shah has repeatedly spoken of the government's plan to introduce National Registry of Citizens throughout the country and take action against illegal immigrants.
The people, he said, have given their approval for the nationwide-implementation of the NRC through their verdict of the 2019 elections.
On Tuesday, Mr Shah spoke of Bengal's contribution Bengal's contribution to the BJP's huge victory in the Lok Sabha elections and expressed hope of a reprise in the state elections.
"The people of Bengal have shown their desire for Parivartan by giving 18 seats to the BJP. I am sure in the next state polls, under the leadership of Narendra Modi, the BJP will form the government in Bengal," he said.--NDTV