"I'm Not Even Muslim But Am At The Frontline": Jamia Student Breaks Down

Jamia Millia Islamia protests: Protests escalated at Jamia when a march led to clashes between protesters and the police. The police later entered the Jamia campus without permission and detained around 100 students, who were released around 3:30 am. 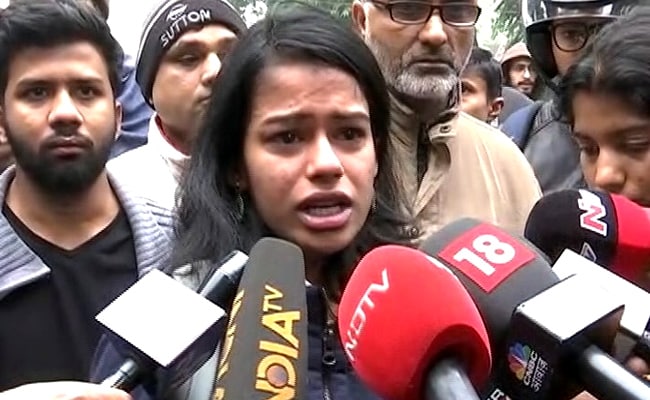 Jamia Millia Islamia protests: "We cried all night. What is happening," a Jamia student said.


New Delhi: Students lay bleeding in the library and on roads and many women hid in the bushes as police stormed the Jamia Millia Islamia University in Delhi during violent protests against the new citizenship law, which have spread to several campuses in the country.

"We thought Delhi is the safest place for students, and this is a central university. I thought the university is the safest place, nothing can happen to us. We cried all night. What is happening," a woman student wept before TV cameras this morning. She said she and many others were leaving the hostel.


"I don't feel safe in this entire country. I don't know where I will go and get lynched. I don't know if tomorrow my friends will be Indians."

Violence had engulfed parts of the country since the citizenship law -- meant to facilitate grant of citizenship to non-Muslims from Pakistan, Afghanistan and Bangladesh living in India -- was passed.

"I am not even Muslim. I'm still at the frontline from Day 1. Why? Because of what has happened to my family... What use is our education if we cannot stand by what is right," the student said.

Protests escalated at Jamia when a march led to clashes between protesters and the police. The police later entered the Jamia campus without permission and detained around 100 students, who were released around 3:30 am.

Another woman student has described moments of horror when the police came charging into the Jamia campus, rounding up students and making them leave the campus, hands raised.

"We were in the library when this started; we got a call from the supervisor that things were getting bad. I was about to leave when a crowd of students rushed in and the library was full in 30 minutes," the student said.

They could hear sounds of a crackdown and windows were shaking. "I saw some boys with blood on them. The cops came inside and started shouting abuses. They asked everyone to move out," the student recounted, remembering that as she started towards her hostel building, she saw boys lying on the road, appearing unconscious.

"We were made to raise our hands up when we walked. Finally I reached my hostel. Then some boys came running to our hostel and said female policemen were coming in to beat us. I ran to some bushes nearby and hid there. Then finally I returned to my hostel. I saw many other boys with blood on their clothes," said the student.

The police entered the campus after a mob clashed with them and set fire to buses and two-wheelers during a protest march by Jamia students. Students have distanced themselves from the violence and the police say the mob may have comprised local thugs trying to create trouble.

Senior police officer Chinmaya Biswal told NDTV that the police entered the university only after the violent mob went inside and started throwing stones. "We were checking from where these violent activities were taking place," he said.-ndtv