‘An assault on reason’:The targeting of university campuses is part of a campaign to discredit dissent

All fascist regimes target universities, since intellectuals have put up the greatest resistance against attacks on reason, freedom of expression and liberty. 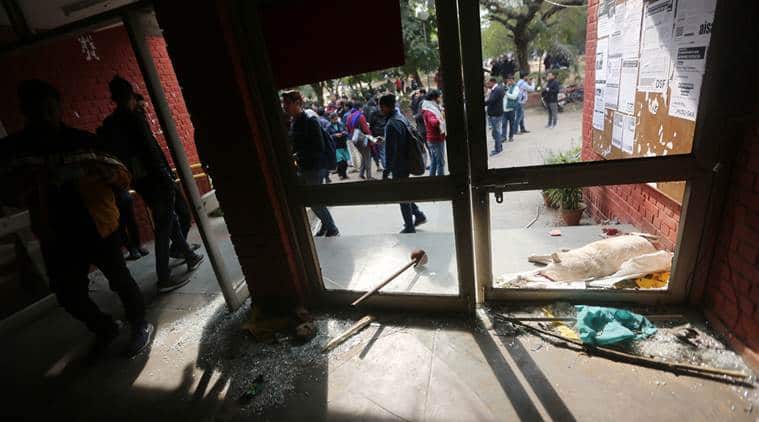 JNUSU claimed ABVP members are ‘pelting bricks, climbing over walls and getting into hostels and beating up students’.

The last few years have seen people from all over the country join hands to protest the policies of the BJP government. Currently, people are out on the streets against the Citizenship (Amendment) Act and the brutal attack on JNU students and faculty.

People are asserting their right to protest, resist and dissent, which are essential for the functioning of any democracy. However, the ruling dispensation, to gain support for their authoritarian rule, is running a sustained campaign, especially on social media, to discredit thinking minds and intellectuals. This campaign is nothing short from an assault on reason itself, a typical characteristic of fascism.

All fascist regimes target universities, since intellectuals have put up the greatest resistance against attacks on reason, freedom of expression and liberty. Since this government came to office, the budgetary allocation for education has been cut, there have been attempts to tamper with history and impose pseudo-science and hearsay in the curriculum.

We have also seen university campuses being turned into battlegrounds for refusing to bow to the sinister designs of the BJP-RSS combine. What happened in JNU on January 5 is not an isolated incident. It was a deliberate attempt to weaken the anti-fee-hike movement. It was an attempt to intimidate the student community, not just of JNU, but of the entire country, and ward off their demand for quality and inexpensive public education.

Starting from the FTII, Pune and Ambedkar-Periyar Study Circle in Chennai, students have resisted the government’s attempts to impose its nefarious agenda. Whether it was the Occupy UGC movement or the protests after the institutional murder of Rohith Vemula, the attempt to malign JNU after the sedition row or the recent police atrocities on the students of Jamia and AMU, students have resisted shoulder-to-shoulder with intellectuals and activists.

This unity is a cause of worry for the RSS-BJP and therefore, they have tried their best to demean intellectuals and activists. This virulent campaign was started by the prime minister when he drew parallels between “hard-work” and “Harvard” to taunt Amartya Sen.

Dissenters from JNU and other universities were dubbed anti-nationals. Many human rights’ activists were trolled for their justified criticism of police and army excesses. Nobel laureate Abhijit Banerjee was attacked on social media when he criticised the government’s economic policies. Union Minister Piyush Goyal dubbed him a “Leftist” as though being a Leftist is bad or unreasonable.

India has a long tradition of dialogue and debate, arguments and counterarguments. Tolerance for difference gave rise to this beautiful and diverse country. In modern times, intellectual leaders of varied hues such as Rammohun Roy, Vivekananda, Tilak, Gandhi, Nehru, Maulana Azad, Bhagat Singh, Ambedkar, Periyar, etc. produced a diversity of views and enabled India to become a plural and tolerant nation. This legacy is being challenged by the BJP-RSS. From Mussolini, Hitler and Franco to Narendra Modi and Amit Shah, this pattern of delegitimising thoughtful voices can be traced. These leaders made populist appeals to the youth based on demagoguery and emotion and downplayed reason and critical thinking.

In Italy and Germany, they turned the youth into cadres of Blackshirts or Brownshirts. In India, the ruling regime is trying to turn the unemployed and frustrated sections into compliant robots or rancorous mobs. The government treats citizens as subjects who need to follow and obey its command.

During the infamous dictatorship of General Franco in Spain, the philosopher Miguel de Unamuno said: “It torments me to think that General Millan Astray might dictate the norms of the psychology of the masses”. Spanish General Millan Astray summed up the fascist argument on intellectuals and critical minds when he replied to Unamuno. The General said: “Death to intelligence! Long live death!” The reply of Unamuno is of special significance to us today in India. He said, “You will win, because you have enough brute force. But you will not convince. In order to convince it is necessary to persuade, and to persuade you will need something that you lack: Reason and right in the struggle.”

History shows that the Left cannot be intimidated. It will emerge as the hope for the people and future. . The writer is general secretary, CPI.--IE