New Delhi: The students union president of the Jawaharlal Nehru University was badly injured as around 50 masked assailants armed with rods and sticks went on the rampage on the institution campus on Sunday evening.


A video clip showed Aishe Ghosh, who was elected as the Jawaharlal Nehru University Students Union president last year, describing the assault with blood streaming down her face. "I have been brutally attacked by goons wearing masks. I have been bleeding. I was brutally beaten up," she said before being rushed to the All India Institute of Medical Sciences for treatment. According to reports coming in, seven ambulances have been rushed to the educational institution.


The students have accused members of the Akhil Bharatiya Vidyarthi Parishad (ABVP), a students' union associated with the Rashtriya Swayamsevak Sangh, of orchestrating the attack. Eyewitnesses said the group of assailants went from hostel to hostel, assaulting students and faculty members. The Sabarmati, Kaveri and Periyar hostels were specifically targeted.

Watch how these ABVP goons are roaming. Delhi Police are stationed at all JNU gates but they let this attack happen on students and teachers.

ABVP will do this only if the nod came from the top.

Shame on you Shah. You are a disgrace of a Home Minister😠
pic.twitter.com/Y1jJFfGh9M
— Srivatsa (@srivatsayb) January 5, 2020

Senior faculty member Sucharita Sen was among those attacked by the mob.

Student leaders accused Delhi Police personnel and private security guards posted on the campus of doing nothing to stop the rampage. Last heard, the students had gathered around the central library to prevent the masked attackers from targeting them individually.

Chief Minister Arvind Kejriwal condemned the incident. "I am so shocked to know about the violence at JNU. Students attacked brutally. Police should immediately stop violence and restore peace. How will the country progress if our students will not be safe inside university campus?" he asked.


The goons unleashed by the Indian government to enter our Universities and campuses to crush dissent. Students are being beaten up, teachers are being attacked. They are going to enter our homes next.

JNUSU
@JNUSUofficial
· 4h
Professors who were trying to protect us have been beaten up. These are unknown ABVP goons, not all are students, they have covered their faces, and they are moving towards the hotels near the West Gate. Stay alert. Make human chains. Protect each other. #SOSJNU #EmergencyinJNU

The JNU administration acknowledged the situation on the campus over an hour after violence broke out, asking students to keep calm and call 100 if the circumstances warranted it. The police, meanwhile, blocked entry to the campus even as disturbing videos continued to emerge from behind its gates. 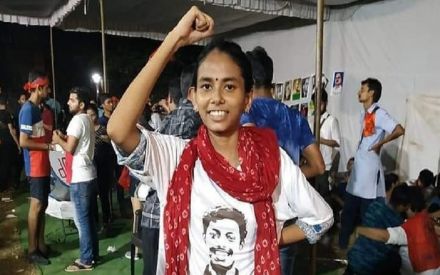 Yogendra Yadav, Swaraj Abhiyan chief and JNU alumnus, accused the Delhi police of being hand-in-glove with the assailants. "There is a mob on the loose inside the campus, but the police do not want to stop them. Instead, they are more keen on preventing the press from entering and reporting on what's going on," he said, pointing at the closed gates.


The attack on the university comes amid an ongoing agitation against a proposed hike in hostel fees, with students boycotting the winter semester registration process. JNU students are also playing a major part in the nationwide protests against the Citizenship Amendment Act.-ndtv