CAA, NRC introduce meddlesome officialdom into a question as fundamental as citizenship

This is not minimal government or maximal governance. It is introducing meddlesome officialdom into a question as fundamental to people’s lives as citizenship — if you are not citizen of the country where you have lived all your life, and no one else wants you, who are you? And it is what many young people are upset about. 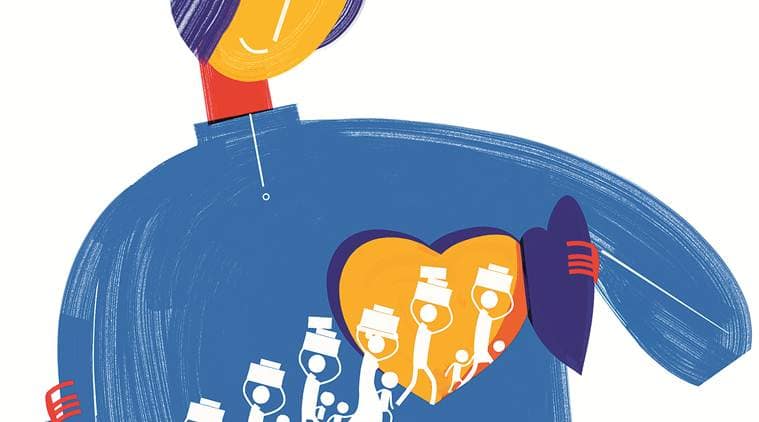 Are Tamil-speaking children of Bengali Hindu migrants to Chennai entitled to jobs in the state government? How about the Marathi-speaking children from Bihar, who grew up in Maharashtra? (Illustration by C R Sasikumar)

In 2014, then candidate Narendra Modi’s slogan of “maximum governance minimum government” had resonated with many voters who felt that the Indian government loomed too large in their lives while delivering too little to them.


What resolves the apparent contradiction between less government and more governance is an emphasis on focusing on the things that the state can do effectively without becoming overbearing.

It is worth thinking of the current debate about the Citizenship Amendment Act (CAA) and the NRC through the lens of this idea. As people who have spent their lives collecting survey data, we are very conscious of how hard it is to get respondents to reliably answer questions that to some of us, used to the world of passport forms and their like, are almost automatic.

We remember asking a 20-something woman in South 24 Parganas district in West Bengal where she was born. “Not in this village”, “over there, one-two hours away”, pointing vaguely south or east. How did you end up here? “My mother was from the next village, but she got married in the village where I was born. But then my father took another wife and sent us back. I must have been six or eight then. We went back to our village, but my maternal uncle refused to take us back. Finally, a woman in this village gave us a place to stay. “ Could you tell us the name of the village? “My mother knew, but she is dead”. We put an “unknown” code (9999, if we remember correctly) for birthplace. The NRC presumes that this woman would be able to provide enough details about her life to establish her true citizenship status. And if she cannot, there is the CAA — for migrant Hindus, or for Sikhs and Christians, Buddhists and Jains. But not for Muslims.

If they cannot establish their citizenship, they would be presumed to be guilty. Of being a foreigner. And perforce stateless. Or subject to the goodwill of some officials, who will decide what status they deserve. And one thing we have learnt from our field work is that this can be a very risky gamble.

This is not minimal government or maximal governance. It is introducing meddlesome officialdom into a question as fundamental to people’s lives as citizenship — if you are not citizen of the country where you have lived all your life, and no one else wants you, who are you? And it is what many young people are upset about.

But there is something else that the government should worry about here. In all of this conversation about citizenship, it seems to take as given that immigrants are a problem. In Assam, this idea has been taken to its logical conclusion — all immigrants, irrespective of religion, are a problem. This is why the CAA is anathema there and the NRC was unpopular for not finding enough foreigners.

In our recent book, Good Economics for Hard Times, we make the case that there is really no economic case against low-skilled economic migrants. All the evidence suggests that even after large bouts of low-skilled migration, the earnings of other low-skilled migrants are unaffected. This is, in part, because economic migrants tend to be hungry for opportunity and make the most of the chance they got by coming across, taking jobs that few locals would want. In part, it is also because migrants not only sell labour but they also buy food and haircuts and everything else with their new earnings.

The real economic challenge is for the middle classes, who worry that this new group of claimants will eventually reach for the prize that they have so far held onto, the ultimate gift of a local government job. But it is a sign of our poor governance that government jobs are as much of a windfall as they are now — the fact that in 2019, 19 million Indians applied for 63,000 low-level jobs in the railways, should tell us we are getting something very wrong.

But more importantly, the same questions about economic justice for the local population, if not confronted now, will arise (and have already arisen) everywhere in India, in an ever more fractal way. Are Tamil-speaking children of Bengali Hindu migrants to Chennai entitled to jobs in the state government? How about the Marathi-speaking children from Bihar, who grew up in Maharashtra? And while you are worrying that, what about good jobs in the private sector? And why stop at the state boundaries? Should Mumbai city jobs be restricted to Mumbaikars? Paranoia about immigration is a genie that needs to be put back in the bottle as soon as possible.

And the best way to get there is to embrace India’s vision of being one of the mother lodes of civilisation. Why not open our doors to everyone who signs up in our national mission of being democratic, open, tolerant and inclusive? Why not Ahmadis who are persecuted in Pakistan (which often fails to be the welcoming homeland for South Asian Muslims that it purports to be) or Hindu Tamils uncomfortable in Sri Lanka? We have 1.3 billion people — a few more millions would disappear in a flash in to that melting pot. And we would really be a lodestar for the world. Banerjee and Duflo are professors of economics at MIT and Overseas Citizens of India. They won the Nobel Prize for economics in 2019-IE