Aishe Ghosh, the president of the students' union said, "I have been brutally attacked by goons wearing masks. I have been bleeding. I was brutally beaten up". 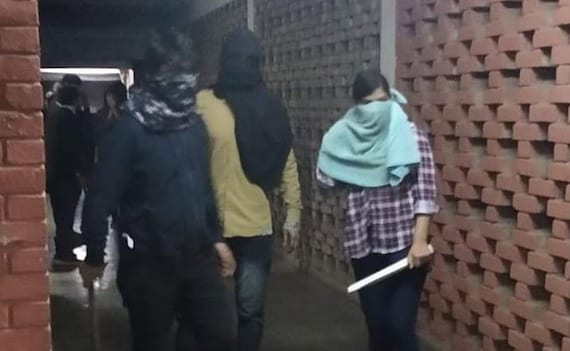 New Delhi: A masked mob armed with sticks and stones barged into Delhi's prestigious Jawaharlal Nehru University this evening and beat up students and teachers, leaving at least 20 injured, including the chief of the students' union. The JNU administration said the attackers are still in the campus and the police have been called. The JNUSU has alleged the involvement of the Akhil Bharatiya Vidyarthi Parishad or ABVP, the student body linked to the BJP, in the attack.


The ABVP has alleged that their members were attacked by leftist students. Later in the evening, the police said they held a flag march in the campus and the situation was "under control". Sources said Home Minister Amit Shah has asked Delhi Police chief Amulya Patnaik for a report. Late in the evening, hundreds gathered outside the police headquarters to protest against the violence.


Here are the Top 10 points in this big story:

Our team of doctors, nurses & medical volunteers who reached JNU to give first aid to injured students & teachers, was attacked by hundreds of goons. Mob manhandled doctors, nurses & threatened them. Our ambulance’s glass & windows broken, this is totally inhuman & insane. pic.twitter.com/IOiu7BHVbG

Watch how these ABVP goons are roaming. Delhi Police are stationed at all JNU gates but they let this attack happen on students and teachers.

ABVP will do this only if the nod came from the top.

Shame on you Shah. You are a disgrace of a Home Minister😠
pic.twitter.com/Y1jJFfGh9M
— Srivatsa (@srivatsayb) January 5, 2020

10. Over the last 70 days, the university has been seeing a standoff between the students and the administration over a hike in hostel fees. The different schools in JNU have been shut as part of the strike. This afternoon, the ABVP and the administration wanted to open the gates and begin registration, which led to a scuffle with the Left wing students, who are opposing the fee hike.-ndtv