Titled "Narendra Modi stokes divisions in the world's biggest democracy", the article - which is also the cover story for its latest edition -- says India's 200 million Muslims fear the prime minister is building a Hindu state. 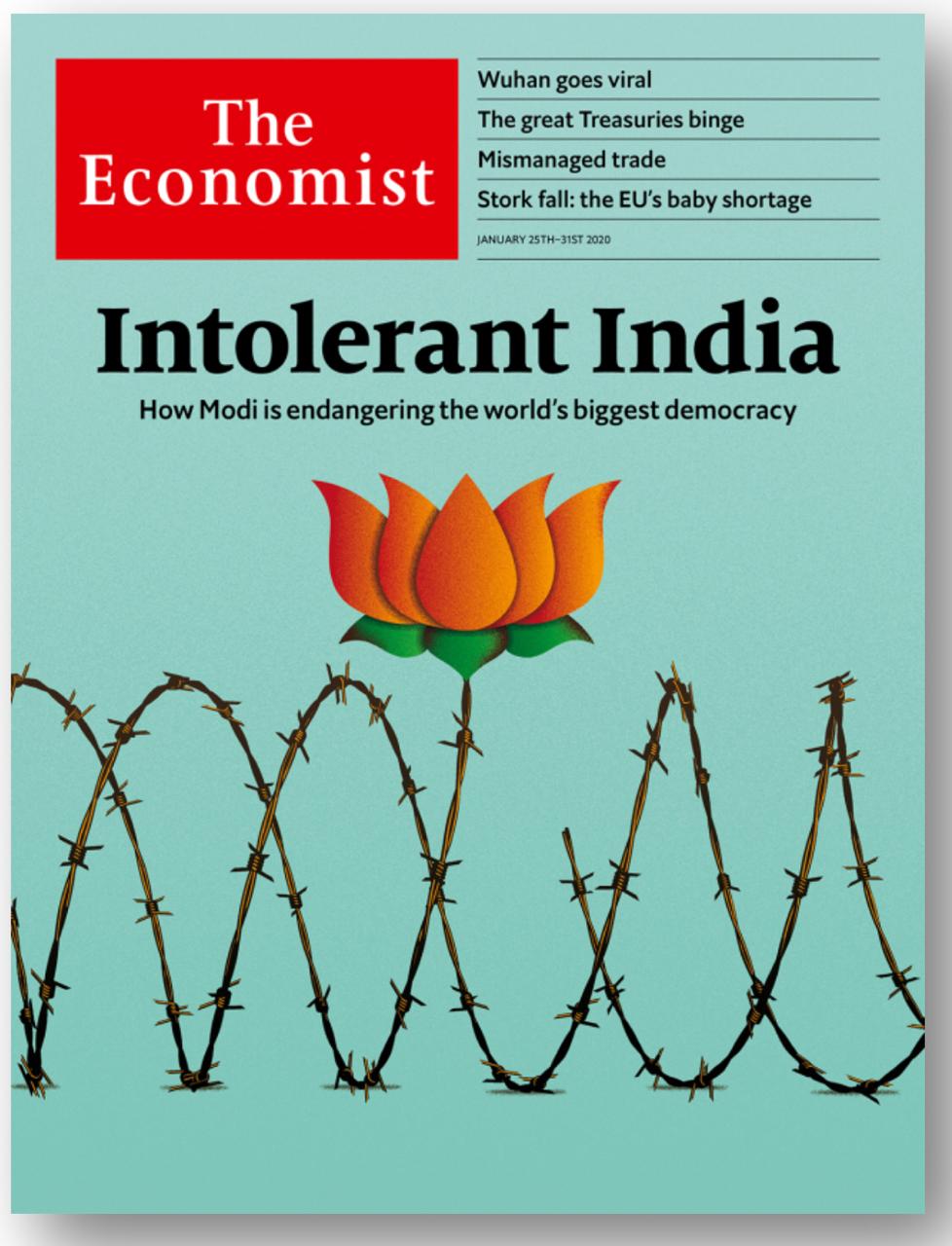 The article says that PM Modi and the BJP are likely to benefit politically by creating divisions.

The Economist - whose sister concern Economist Intelligence Unit ranked India 10 places lower in the Democracy Index earlier this week -- has dedicated its latest cover to what it calls "Intolerant India" and criticised the Narendra Modi government over the new citizenship law CAA and the National Register of Citizens (NRC), commenting that it "imperils the inspiring idea of India as the world's largest democracy".

The Economist tweeted the cover yesterday and wrote: "How India's prime minister and his party are endangering the world's biggest democracy."

Sketching the rise of the BJP with the movement for a Ram temple in the '80s, the article argues that "Mr Modi and the BJP are likely to benefit politically by creating divisions over religion and national identity".
"The plan to compile a register of genuine Indians as part of a hunt for foreign interlopers affects all 1.3bn people in the country. It could drag on for years, inflaming passions over and over again, as the list is compiled, challenged and revised" the article says.
Such subjects "also distract attention from awkward topics such as the economy, which has struggled since the BJP's thumping election victory last year", it notes.
The BJP hit back, with party leader Vijay Chauthaiwale calling The Economist "arrogant", with a "colonial mindset".
"We thought the Brits had left in 1947! But the editors of @TheEconomist are still living in in colonial era. They are furious when 600m Indians do not follow their explicit instructions of not voting (PM) Modi," Mr Chauthaiwale, BJP's foreign policy in-charge, tweeted.

We thought the Brits had left in 1947! But the editors of @TheEconomist are still living in in colonial era. They are furious when 600m Indians do not follow their explicit instructions of not voting Modi. https://twitter.com/theeconomist/status/1220345476622561280 …

The Economist
✔@TheEconomist
How India's prime minister and his party are endangering the world's biggest democracy. Our cover this week https://econ.st/30PhRi1 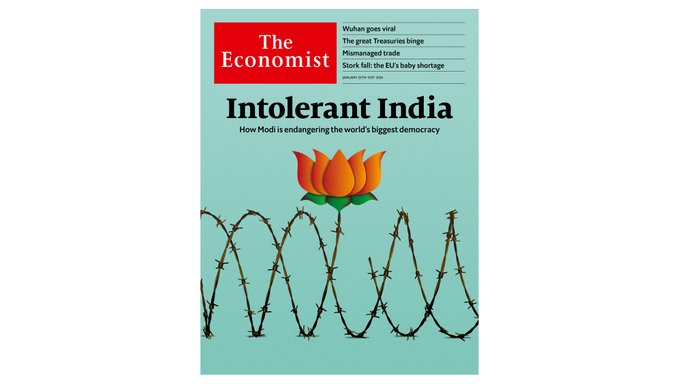 Replying to @vijai63
So arrogant they are that they are now advising/threatening Indian Supreme Court. Illegal emigrants are allegedly hunted down in India !! And in the UK? Which country talks about returnees? And how clever to fudge the intent of the CAA? Colonial mindset of few willl never change.


218 people are talking about this 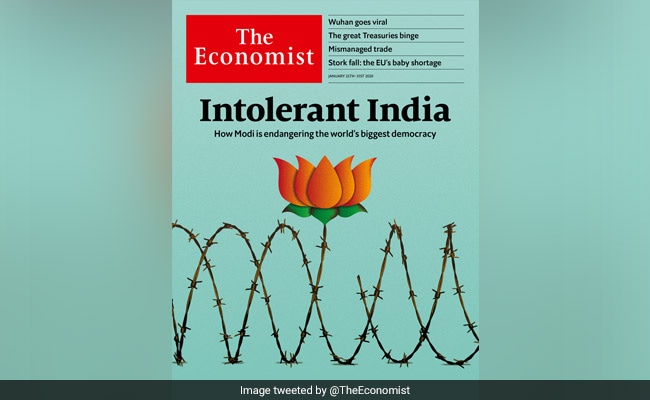 The cover story of its latest edition, titled "Narendra Modi stokes divisions in the world's biggest democracy", says India's 200 million Muslims fear the Prime Minister is building a Hindu state.
The Economist Intelligence Unit's Democracy Index for 2019 has ranked India 51st among 165 nations and two territories, with its lowest ever score of 6.9 out of 10. The research and analysis division of The Economist Group has attributed the drop to "democratic regression (in) erosion of civil liberties".
The EIU report mentioned the protests against the Citizenship (Amendment) Act or the CAA, which makes religion a test of citizenship for the first time in India's history, and the NRC.
The CAA provides for citizenship for non-Muslim minorities from Muslim-majority countries like Pakistan, Bangladesh and Afghanistan if they fled religious persecution and entered India before 2015. Critics believe the law, along with the NRC, will be used to target Muslims.
"The passage by Parliament in December of the discriminatory Citizenship (Amendment) Act suggests India's decline will continue in the 2020 index," the EIU report said in its observations on India.


The report also referred to the situation in Jammu and Kashmir after the Centre last year ended its special status under the Article 370 of the constitution.
Protests over the citizenship law became a talking point at the World Economic Forum in Davos, Switzerland, where Union minister Piyush Goyal tackled questions on it.
Asked by one of the youth representatives why India was not taking advantage of its diversity and secular constitution and improving its economy, Mr Goyal said Muslims in India are safer than anywhere in the world "in terms of equal opportunity".
"There is absolutely no discrimination in any of the programmes. When we take electricity to every home, we don't ask their religion. When we take toilets to every home, we don't ask anyone what their religion or background is. When we take digital technologies, when we take bank accounts, when we take cooking gas, when we take development to every home, when we provide income support to farmers, all programs are equal for all," he said.


The minister also pointed out that citizenship is an area "every nation protects".
-ndtv