Students have accused the police of doing nothing to stop the assailants, who they claim belong to the RSS-affiliated Akhil Bharatiya Vidyarthi Parishad.

One of the masked assailants who attacked students and faculty members on the JNU campus.

Mobile phone footage from a building at the Jawaharlal Nehru University showed a group of masked intruders armed with sticks and iron rods attacking its students and faculty members, providing a shocking glimpse of the chaos that broke out on its campus on Sunday evening.

Several students and faculty members were assaulted by the armed miscreants, and three of them are reportedly in a critical condition. The masked assailants went from room to room of many hostels on the campus, brutally assaulting their occupants.
Students have accused the police of doing nothing to stop the assailants, who they claim belong to the RSS-affiliated Akhil Bharatiya Vidyarthi Parishad (ABVP). Among the 30 injured are around 12 teachers and Jawaharlal Nehru University Students Union president Aishe Ghosh.

#WATCH Delhi: Jawaharlal Nehru University Students' Union president & students attacked by people wearing masks on campus. 'What is this? Who are you? Step back, Who are you trying to threaten?... ABVP go back,' can be heard in video. (note: abusive language) 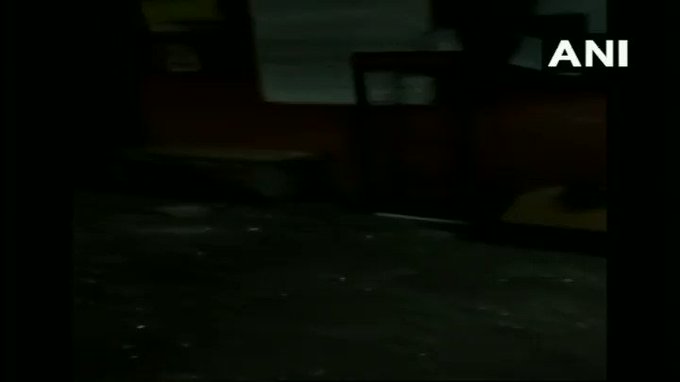 The video begins with somebody asking the students to gather together in the darkened hall to defend themselves against the group of assailants heading their way. The camera remains focussed on a corridor, and soon, a man is seen running down it with a stick. In the midst of the chaos, a voice rings out. "This is the girl who said she is a JNU student! She is not! Who are you?"
Even as the screams continue, a group of masked people armed with iron rods and sticks come sauntering down the corridor. Two of them, a man in black clothes and another wearing a checked shirt, threateningly gesture at the students with their weapons.
The students remain defiant. "Who do you think you are trying to scare? Just try and touch us!" screams one of them, telling those around her to form a human chain.
Just then, the assailants pounce on them, and there is confusion all around. Shouts of pain ring out, followed by the sound of glass shattering. A sole assailant dashes in, bringing his weapon down on one of the cowering students.
Even as the camera goes briefly out of focus, somebody is heard shouting: "ABVP go back!"

Hundreds of people have gathered outside the police headquarters at ITO Junction to protest alleged police inaction during the rampage. While Chief Minister Arvind Kejriwal condemned the attack, Congress leader Rahul Gandhi blamed the BJP-ruled centre for the shocking incident.-ndtv