"Amit Shah is the Home Minister, he is so powerful, do you think he cannot clear a road if he wants to? He doesn't want to as he wants to fight the entire Delhi election on Shaheen Bagh. The BJP has no other issue," said the Chief Minister. 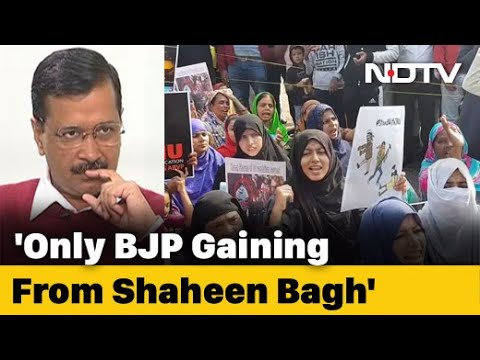 New Delhi: Home Minister Amit Shah wants to fight the entire Delhi election on the Shaheen Bagh protests, Arvind Kejriwal said today, questioning, "He is so powerful. Can he not open a road?" In an exclusive interview to NDTV ahead of the Saturday vote in the capital, the Delhi Chief Minister said no other party lies more than the BJP and a "great man like Amit Shah" also peddled lies.


The Shaheen Bagh protest against the citizenship law, in which hundreds of women and children have spent nights sitting on the road, had been targeted by critics because of the traffic blocks and inconvenience to people travelling through south Delhi towards Noida, Mr Kejriwal remarked.

"Amit Shah is the Home Minister, he is so powerful, do you think he cannot clear a road if he wants to? He doesn't want to as he wants to fight the entire Delhi election on Shaheen Bagh. The BJP has no other issue," said the Chief Minister.

Arvind Kejriwal said if his government had control over the police, then "we would have cleared the area within two hours".

Mr Kejriwal also responded to BJP leaders including a Union Minister calling him "terrorist" during the vitriolic campaign for Delhi.

"Do I look like a terrorist from any angle," he asked.

Asked about the BJP's "investigation" of the Aam Aadmi Party (AAP)'s claims to have built schools and clinics, Mr Kejriwal lashed out at the ruling party.

"They click photos of schools that have closed down as children have moved to new buildings, and show them as dilapidated conditions for students. What a lie... in fact your channel also investigated the case and found out that the BJP is lying," he said.

Yesterday, at a public rally in Delhi, Prime Minister Narendra Modi also accused the Kejriwal government in Delhi of not implementing a central healthcare scheme 'Ayushman Bharat' because of politics. "We have not gone ahead with the scheme because in Delhi it would benefit less than 1 lakh people. The Delhi government's healthcare scheme, on the other hand, benefits all 2 crore people of Delhi - rich or poor - everyone. We told the centre we can implement both schemes in Delhi - yours as well as ours, but they outright refused. They said it will either be yours or ours. I am saying it here... I am still open to implementing both in Delhi," Mr Kejriwal said.--NDTV