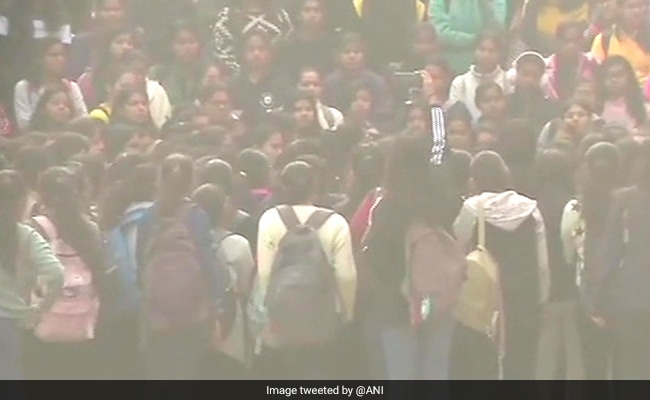 The National Commission for Women (NCW) has taken cognizance of alleged sexual assault on students of Delhi's Gargi College for women by some unidentified men during their annual cultural fest last week.  A team of the Commission visited the college on Monday amid the protest rally by the students.


Few students from the all-girls college alleged that they were sexually assaulted on campus during their annual cultural fest, 'Reverie', this week by men who forced their way in while security guards, while the police posted in the area did nothing.
A group of drunken men reportedly entered the college affiliated to Delhi University and manhandled the students.
"I can't confirm the allegations of molestation but a large group of drunken men had dropped in and manhandled students," a student requesting anonymity told news agency IANS.

Here are the LIVE Updates of protests at Gargi College:

Feb 10, 2020 12:10 (IST)
Delhi Commission For Women Chief Swati Maliwal at Gargi College
Feb 10, 2020 12:00 (IST)
The girls said no action was taken: Rekha Sharma, NCW Chairperson"I read on social media that girls were molested and there was no step taken by the administration. I have sent a team and they wanted to talk principal and police. The girls said no action was taken," Rekha Sharma, NCW Chairperson said.
Feb 10, 2020 11:56 (IST)
Congress candidate from Kalkaji constituency Shivani Chopra condemned the incident and arrived at Gargi College earlier today to express solidarity with the students.
"They are not letting me enter the campus. It's a shameful incident. Chief Minister of Delhi should come out and stand in solidarity with the students. In fact, Home Minister Amit Shah should also come out and take cognizance of the law and order situation," she added.
Feb 10, 2020 11:52 (IST)
We are inquiring into the matter: Delhi PoliceDelhi Police have begun a probe into the matter of alleged harassment and sexual abuse of female students in the college by a number of unidentified men during the fest on February 6.
"We are inquiring into the matter. However, we haven't received any complaint so far," said Deputy Commissioner of Police (DCP) South, Atul Thakur.
Feb 10, 2020 11:36 (IST)
Aam Aadmi Party Leader Sanjay Singh gives Zero Hour Notice over Gargi College incidentAam Aadmi Party (AAP) MP Sanjay Singh on Monday gave a Zero Hour Notice in Rajya Sabha over "indecent behaviour with students of Delhi's Gargi college during the college's annual festival."
Feb 10, 2020 11:34 (IST)
National Commission for Women team visits Gargi College
Posted by Raj Rishi at 11:12 PM